Such is their fame and their familiarity that only first name terms are needed. For those less Francophile, we are talking, of course, about Jane Birkin and Charlotte Gainsbourg – the subject and the director of a documentary film by a daughter about her mother, which premiered on Thursday night at the Cannes Film Festival.

“Jane by Charlotte” is a sensitive, pretty, reflective and artful piece that attains intriguing levels of intimacy and emotion alongside moments of banality. The suggestion being, perhaps, that life, even for people who lived around the bohemian chaos of iconic French actor and singer Serge Gainsbourg, isn’t always a thrill, or a performance, or a tragedy but all these things at once.

Charlotte, best known as an actress for her sexually confrontational roles in Lars von Trier movies such as “Antichrist” and “Nymphomaniac,” begins her film with a startling confession, with her mother telling her she used to find her own teenage daughter intimidating and that she wanted to touch her young body.

This feels quite extraordinary, that a mother would be sanctioning — and be seduced by — the infamous episodes of rock star Serge Gainsbourg lying with the couple’s 13-year-old daughter on a bed as he did in the video for their 1984 record “Lemon Incest.” But it is part of the enduring Gainsbourg myth, this “vie de boheme,” which Jane and Charlotte make look so effortless and so stylish while making it also part of their ordinariness. We watch Jane being a grandma, buying fish and cooking roast lamb for dinner, but even that comes across as an exercise in scatty brinksmanship, just as her breathy singing and “au naturel” performance style have come to look slung together.

Charlotte gets her mother to talk about very intimate events, and she comes over as particularly haunted by the relationship with her first husband, the composer John Barry. He treated her badly and unfaithfully, but left her with a daughter, Kate, whom Serge raised as his own. Kate became a photographer, struggled with addictions and died in Paris after falling from her apartment window in 2013.

The pain still eats at Birkin, who at one point refuses to watch old home movies that are blown up on big walls in the background as Charlotte interviews her.

“We talk about the dead more than we do the living,” sighs Birkin, who had three daughters by three different husbands (Kate, Charlotte and Lou, with the director Jacques Dillon). She says she wanted to be fair to each daughter and not unbalance each relationship.

For all its domesticity, a lot of the doc is devoted to performance, following Charlotte and her mum as they rehearse together for a concert in New York (“Birkin Gainsbourg The Symphonic” at the Beacon in March 2020, including a very brief appearance by Iggy Pop). Together, they do a version of “Moi je t’aime non plus,” the sexually suggestive No. 1 song Jane recorded with Serge in 1968, and one that was banned on radio stations around the world. There are also many scenes of Charlotte photographing her mom, photo sessions that are part of the interview and which recall Jane’s role in Antonioni’s swinging London classic “Blow Up.” “I always loved having my picture taken,” says Jane, “when I was young and pretty, that is.”

Physicality and mortality become dominant themes; Jane’s iconic beauty has long been a defining aspect of her life and, indeed, cultural life in general. But here she is now, talking about gaining weight, wrinkles and if she should have her lips done or if she should just take away all the mirrors and not wear glasses so that everything becomes blurry. “Life is just easier that way,” she muses. 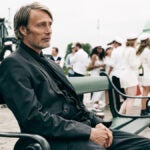 The highlight and the heart of the film is a visit to the house on Rue de Verneuil they both shared with Serge Gainsbourg, an address that has become a Parisian shrine over the years. Fans have graffitied and frescoed on the walls outside, and Charlotte has now purchased the house with plans to turn into a museum. It’s long been known that the place has been kept exactly how it was when Serge died there in 1991, but to follow these two as they open it up again to reveal a trove of memories is quite remarkable.

The house is tiny — “une maison poupee (a doll’s house),” Jane says — and stuffed with things on every inch of floor and wall. There are photos of Brigitte Bardot (with whom Serge Gainsbourg had an affair and for whom he originally wrote “Je t’aime”), Marilyn Monroe, the kids, Jane. But there are also knickknacks and tapestries, perfume bottles that still retain their scent, a statue of Birkin’s torso, chairs, musical instruments and, in the kitchen, a collection of tins of vegetables, tuna, chickpeas and even stuff still in the fridge, all frozen in time, like something from Pompeii.

There’s also an impressive medicine cabinet. “We took so many sleeping pills,” recalls Jane. “And we were always drunk.”

Gently, smartly, Charlotte uses her mother’s life to muse on mortality and the value of what we all amass, emotionally and physically. “An overwhelming accumulation of things,” Birkin calls it. She’s referring to the clutter of her own country house in Lannilis in the stormy region of Finisterre, Brittany, which is full of “dead batteries, bits of wires, felt marker pens and an old BBQ that Serge bought me … I can’t get rid of anything.”

And that’s what the film, with its layers, tones and modes, suggests so beautifully in creating a filmed portrait of a notable figure whose private life is lived in public, shared with apparent ease but full of confessions: her Mum.