New Zealand writer-director Jane Campion, whose few but impressive credits include “The Piano,” which won three Oscars including Best Screenplay for Campion, “The Portrait of a Lady” and “An Angel at my Table,” has always marched to the beat of her own drummer, and always liked a challenge. She certainly found one with her latest film, “Bright Star,” the story of the passionate affair between an unknown 23-year-old English poet, John Keats (Ben Whishaw) and the young, flirty fashionista next door, Fanny Brawne (Abbie Cornish).
In fact, Keats’ love for Fanny inspired some of the most beautiful poems and love letters ever written, which in turn formed the basis for the film which tells a heartbreaking story of romantic obsession and tragic early death — the quintessential Romantic poet died of TB in Rome in 1821, his genius still unrecognized by the world.
What inspired you to make this film? 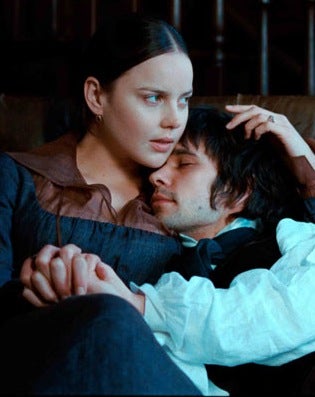 I’d read this biography of Keats, by Andrew Motion, and thought it was such a beautiful, tragic love story, and so moving. That was the initial inspiration. And then I’d taken four years off and my job was to do nothing, and I was in this paddock one day with a thermos of coffee and a ragbag collection of horses, and they sniffed around me for a while and then wandered off — except for this one mare, who was obviously very curious to see what I had in my bag. Chocolate? Carrots? Biscuits? (Laughs). But it was hard for her as she only had a hoof. So I watched her and she just put her muzzle up to my bag and very gently slipped it open and sniffed around for sugar or whatever. And at that moment I got the flash of inspiration.
It’s weird how it happens. I was just so moved by her delicacy and the tenderness, and the gentleness with which she explored the situation. I thought right then, that’s exactly what I want to do with my story.
Their doomed Romeo and Juliet love affair is fairly well-documented, and Fanny kept all her letters from him. Did you feel an obligation to stay as close as possible to all the known facts?
I think it depends on the particular project. Sometimes you can tell a biography even when you’re way off the facts, like the Bob Dylan “I’m Not There” one. By being way off, you can get to the heart of it, the truth of it, in a strange way. In this case, I gave myself the guidelines of staying historically true and just working with it. Of course, I don’t know what they really said to each other, but it was a way of restricting myself, in acceptance of it. I think every biography is a work of fiction anyway — even the autobiography.
Were you worried at any point that this could easily have turned into one of those stuffy period pieces?
I was terrified! I don’t think anyone really wants to make that kind of film, but it’s often the kind of casualty of having too short a rehearsal period and too unconsidered a preparation time. So my goal was to try and get that tone of intimacy that I felt so strongly from his letters to her.
What made you cast Ben?
When Pathe said to me “We really like the script, let’s get going,” I felt a shudder of fear. First of all, I felt, we’ve got to find the right person to play Keats, because if we don’t have someone you can believe might have written these beautiful poems, then we don’t have a movie. So I asked them who they thought would work, as I wasn’t that familiar with young British actors. And the name Ben Whishaw did come up, as Pathe had already done “Perfume” with him, and they talked to me about a brilliant Hamlet he’d done with Trevor Nunn that was apparently phenomenal.
So I went to see him in “Perfume” and he was playing this sort of wolf-murderer, and I was like, “Nah, I don’t think so!” I just couldn’t see it, especially as that character could hardly speak. (Laughs). But then his agent sent me a bunch of photographs where he basically looked like the most gorgeous rock star you could imagine — sensitive, inscrutable, secretive, interesting and sexy. Looking back on it and watching his work, it’s almost like I was obsessed with him. I could just keep watching him forever, I’d think about him all the time (laughs).
You also got a great Fanny in Abby Cornish.
She’s very unusual on this planet, for young women. She’s incredibly independent and strong-willed, and works totally from instincts.
So did you butt heads at all on the set?
Yes, in that we’d really argue the case about different things, as she had a strong opinion. And I think that’s a good sign. It can be frustrating (laughs), but I always feel that it means the person is committed. They care. They’re not just going to always agree with what the director thinks. She pointed out to me where she thought things could be improved, and it was worth listening to, because if it didn’t feel true in her body and feeling, then it probably did need adjusting. And she’s the one person I’ve never heard ever gossip. I’ve never heard her say a bad word about anyone.
There’s great chemistry between Ben and Abby. Can great actors just fake it?
Maybe. I don’t know what chemistry is, but they definitely have it. They really enjoyed each other’s essence and what they would come up with.
FEATURED VIDEO (SPONSORED)
x
Looks like you're enjoying reading