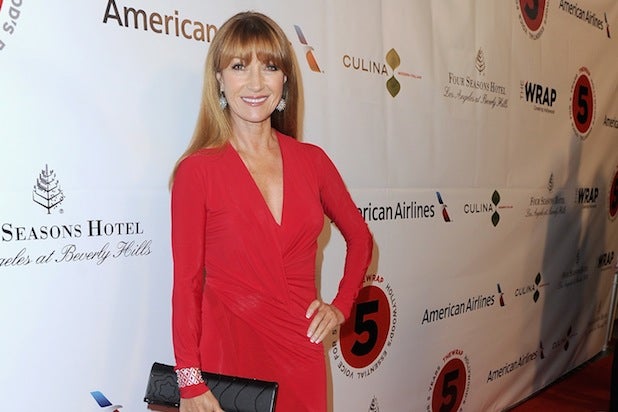 Jane Seymour continues her limited story arc on TNT’s “Franklin & Bash” Wednesday night, where she needs the title characters to get her acquitted of a prostitution charge.

Seymour plays Coleen Bash, the mother of Peter (Mark-Paul Gosselaar), who happens to be a sex surrogate.

TheWrap spoke with the one-time “Bond” girl about her unique career as an actress and designer, how closely she keeps up with the “Bond” films and what it’s like kissing Heather Locklear. Yes, that happens in Wednesday’s episode.

Also read: How the Rock Went From Action Hero to TNT Reality ‘Hero’

The interview began with Seymour explaining her role as the TNT comedy-drama’s first sex surrogate — which is not to be confused with a hooker, according to her on-camera son and attorney. In the episode, Seymour is arrested for being a lady of the night, though it’s not quite the same job. She explains what goes down in the show:

Seymour: When [Franklin and Bash] come to get her out of jail, all the other prostitutes in jail think, “Oh, that’s cool, we’ll be sex surrogates too.” So really the episode is about how they tried to defend [Coleen] and understand what it is she actually did and is doing … It’s very funny and needless to say the two guys banter with one another, and Peter is completely teased by his partner for having a mother who is a sex surrogate.

Then at one point in the office I see Heather Locklear‘s character, Rachel King, and I find out from a conversation over a glass of wine she hasn’t had sex in six years, so I just decide to kiss her and see if there’s any life in her.

Seymour: It won’t hurt ratings, and all I can say is if I tell you any more I’ll spoil the episode. But they say — and I haven’t seen the final episode yet — that it’s one of the funniest they’ve had in the series.

Seymour: I think you have to wait and see!

TheWrap: So what is the difference between a prostitute and a sex surrogate, just so I understand this?

Seymour: Prostitutes always have sex with their subjects and sex surrogates don’t. You have to see the episode to understand it, but a sex surrogate is someone who is paid to help someone with their sexual issues.

TheWrap: You’ve had such a varied career with a number of iconic roles, what are you most recognized for?

Seymour: The younger generation would say “Wedding Crashers,” unless their parents forced them to watch “Dr. Quinn.” Everyone for some reason still knows me as a “Bond” girl, which I find amusing, and then “Somewhere in Time” of course. More and more people are falling in love with that movie long after it came out. I meet people all the time — especially men — who are obsessed with that movie. I mean, they don’t watch it once, they watch it 15 times. It’s a bit of a sickness.

Seymour: I don’t get a penny from it. But I did have the great pleasure of working with Christopher Reeves on that one, which was lovely. I’ve been doing a lot of comedy recently which I really enjoy. I just did something in England with Greg Wise and James Fox called “The Unknown Heart,” but I’m not sure when that’s coming out here. I keep working.