"I'm sure you're both convinced my self-destructive streak has won out again…
But I do plan on coming back to (secretarial) school…
I'm awfully sorry to be such a disappointment to you…
Please believe that you can't possibly want for me to be a winner more than I do."

Janis, 1966 letter to her parents,
after joining Big Brother and the Holding Company 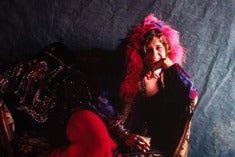 Four years after the letter was written, on Oct. 4, 1970, the Queen of the Blues was found on the floor of her Los Angeles hotel room, dead from a heroin overdose.

Weeks before, her former lover, Jimi Hendrix, had perished in London. "I can't say I was shocked," Janis reacted. Then she added: "It just decreases my chances. Two rock stars can't die in the same year."

In the last 20 months, she had overdosed six times, once almost fatally. But, "Nothing will ever happen to me," she often reassured her friends, "because I come from good pioneer stock."

Janis's addiction dated back to her first days with Big Brother. "She attributed her heroin use to the fear that would accompany her growing fame," wrote her assistant and biographer, Myra Friedman. "Chronic suicide was what she was involved with her entire life."

Janis looked at it differently. "The more you live, the less you die," had always been her motto.

By her own admission, on stage she experienced the purest and most intense expression of life. She had always gloried in living on what she called "on the outer limits of probability."

Watching her perform was like beholding both an agonizingly wonderful birth and a self-immolation. As far beyond the limits of life and probability the Queen of the Blues went, she never lost sight of who she was doing it for: her ever-expanding audience which, like an insatiable but passive suitor, demanded more and more. Yet, just as the fans couldn't get enough of her bursting heart, she couldn't get enough of their adoration.

"I only live to perform," she told an interviewer. "That's the only time I really feel." She compared performing to "falling in love twenty times" and to "having a baby."

Both she and her audience fell in love 20 times at Monterey Pop in the spring of '67 — the gig that turned her, as it did Hendrix, from a local cult figure into an international sensation. No one had heard a human being sing like this before.

Riveting, almost harrowing in its intensity, her "Ball and Chain" was something beyond song. She used her voice like Hendrix did his guitar, but with greater emotional range — tenderness, tears, and desperate longing beneath the raw power. Hers was music from the heart, the soul, and every fiber of her being which left the audience of 70,000 breathless and awestruck.

Just before the glorious debut she wrote another letter to her mother, a Texas Sunday school teacher, and father, a Texaco engineer. "From all indications I'm going to become rich & famous. Incredible! … Wow, I'm so lucky — I just fumbled around being a mixed up kid & then fell into this."

But soon she began to descend into the darkness and isolation of fame. "Onstage I make love to 25,000 people," she said. "Then I go home. Alone."

Near the end she had millions of fans, and had had thousands of lovers. But, "Nobody really loves me, NOBODY," was her constant lament. "The only people who love me are the junkies I used to know … and the people on my payroll."

Her lovers spoke of her nerves being nearer to the skin, how no one took hurt so heavy, and how when Janis was happy, "she STILL wasn't happy."

But, in her last days, true happiness seemed to at last be within her grasp. She was creating the greatest album of her career, "Pearl"; she had a new band that she adored, Full Tilt Boogie; and she was engaged to the man of her dreams, Seth Morgan.

At first she was giddy with happiness. But soon, overcome with doubt and foreboding, she wept to her Bobby McGee, Kris Kristoffersen. "What's it all worth?"

Would her new album become the hit she hoped would revive her flagging career? Would her band leave her? Did her fiancée, a star grifter, a womanizer, a violent coke dealer, only want her money?

Janis spent her last night in an L.A. bar with her band. Returning alone to her hotel room, she found it empty. Seth was not there as he had promised. He was bedding a waitress in San Francisco.

Her road manager found her body the next afternoon. On that day, she was scheduled to record the vocal for the last song on her new album: "Buried Alive in the Blues."

Janis once said, "People like their blues singers miserable. They like their blues singers to die afterwards." Perhaps she was a martyr to her profession. But, in a more profound way, having an unquenchable lust for life in all its joys and sorrows, she had done more living in her brief but tempestuous 27 years than many would ever know regardless of longevity.

Janis never betrayed the vow she had made to herself before embarking on her legendary career. In spite of "the whole success thing," as she called it, she remained true to herself, never straying from "the person I was on the inside," never failing "to be righteous to myself … to be real." Or, as she told others, even more succinctly, "Don't compromise yourself. It's all you've got."

Few artists, before or since, have dug deeper into their heart and soul, and turned it into sublime music. Hers was a song of such power and of such breadth that we cannot define, much less ever duplicate it. We can only honor and cherish it as the immortal hymn of a great spirit who burst all the bounds of life.