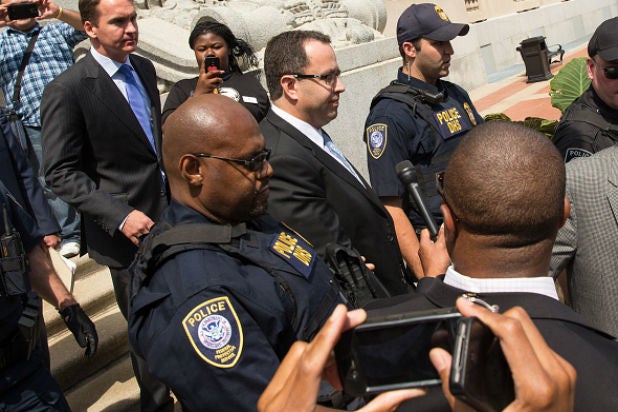 Jared Fogle was sentenced to 15.6 years in prison for conspiracy to receive child pornography and traveling to have sex with a minor by an Indiana judge on Thursday, Indianapolis station Fox 59 reports.

Fogle will also be subjected to lifetime supervised release following the completion of his sentence.

In August, the former Subway spokesman agreed to plead guilty to receiving and distributing child pornography, as well as engaging in an unlawful sex act with a minor. Fogle has paid out $1.4 million in restitution, $100,000 for each of his 14 victims.

During sentencing on Thursday, Fogle’s defense argued that a five-year sentence — the minimum within the range that Fogle’s attorneys and prosecutors agreed to — was more than adequate. Fogle’s defense contended that he didn’t produce any of the child pornography, and that he “didn’t try to pretend he was something he wasn’t,” referencing cases in which defendants lured victims.

Prosecutors earlier agreed not to seek more than 12 and a half years for Fogle.

Fogle’s defense also claimed that Fogle — who rose to fame as a Subway pitchman after losing more than 200 pounds eating Subway sandwiches — traded “a horrible food addiction for a horrible sex addiction.”

During his sentencing, Fogle told the court, “I take full responsibility for what I’ve done,” adding that he hopes to “make a positive impact.”

Breaking down in tears at one point in court, Fogle said that not “a day will go by where I don’t think of” the victims, adding that the restitution that he’s paid out will help them.

The prosecution contended Thursday that Fogle “can’t control his demons” and pointed to a “pattern of behavior.”

“While no sentence will bring back the innocence or relieve the pain of Fogle’s victims, Judge Pratt properly rejected Fogle’s plea for a 5 year sentence and imposed an appropriate sentence of 15 and ½ years,” U.S. attorney Josh Minkler said in a statement following the sentencing. “Those who engage in child exploitation received a clear message today.  If you engage in this conduct, you will be investigated, identified, and prosecuted, and you will go to prison.”
According to court documents obtained by TheWrap, Fogle received multiple images of minors engaged in sex acts from Taylor and knew that those depicted were under 18. Taylor filmed the minors without their knowledge using a series of hidden cameras in his home. Some of those depicted were reportedly as young as six years old.

Fogle also traveled multiple times to New York with the purpose of engaging in a sex act with a minor. One victim was 16 when she had sex with Fogle in exchange for money. He also informed multiple prostitutes that he hired across several different states that he would provide a “finder’s fee” to anyone who could arrange for him to have sex with a minor.

Former Florida journalist Rochelle Herman-Walrond recently released recording she secretly made of conversations allegedly of Fogle in which he proposed a wide range of sexual activities with minors.

“Jared wanted to me to plan a party,” Herman-Walrond told Dr. Phil McGraw in an interview. “He wanted me to set up my children, but along with their friends and their friends’ siblings.”

During the interview, Herman-Walrond also detailed how Fogle had asked about placing cameras in the bedrooms of her children.

“What if we, what if we put a camera in your kids’ room, would they be okay with that?” Fogle is heard saying in the recordings. “Would you rather have it in your son or your daughter’s room?”

Subway posted a statement on Twitter distancing itself from Fogle before the plea deal was announced. “We no longer have a relationship with Jared and have no further comment,” the statement said.