Jared Kushner is the latest Trumpworld figure to get a book deal about his time working in former president Donald Trump’s White House.

Kushner, who is Trump’s son-in-law and served as a high-profile adviser during the single-term administration, will release a memoir next year with Broadside Books, a conservative imprint of Murdoch-owned HarperCollins, according to an announcement late Tuesday.

“His book will be the definitive, thorough recounting of the administration — and the truth about what happened behind closed doors,” said the announcement, which did not include financial terms. 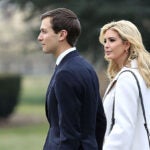 Kushner made plenty of headlines during his stint as senior adviser to the former president. Despite no previous government experience, he was tasked with leading the government’s response to the opioid crisis, criminal justice reform, as well as serving as a liaison with China, Mexico and Muslim-Americans. He also served as liaison in Middle East negotiations and led a widely criticized COVID-19 task force last year.

Twitter observers reacted scornfully to the news of Kushner’s book deal, with Democratic operative Jon Cooper polling his followers on whether they’d read the book and receiving, of course, a smattering of “no”s.

“I’m old enough to remember when Jared Kushner abandoned a national testing plan because it was ‘politically advantageous’ to sit back and let people die in blue states,” fumed comedian Nick Pappas. “I’m guessing there won’t be a chapter about that in his book.”

Others questioned whether the book would be “horror” or “science fiction.”