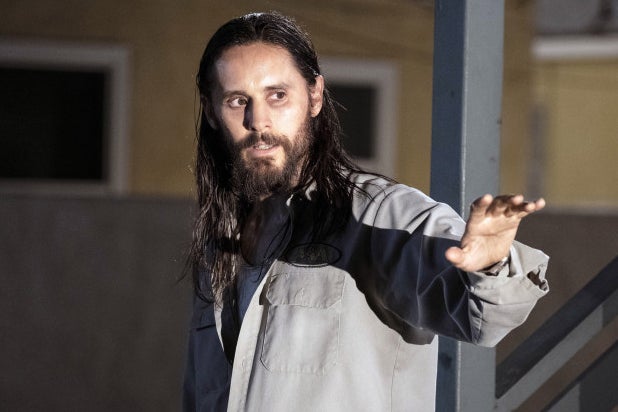 Jared Leto was not anticipating his Golden Globe nomination for “The Little Things” Wednesday (he didn’t even realize the nominations were being announced today), but when he first took the part he knew his performance would be notable one way or another.

In John Lee Hancock’s thriller, Leto plays a suspected serial killer being pursued by detectives played by Denzel Washington and Rami Malek. And though he described his performance as a big risk, he at least knew that Washington for one was a fan.

“I had heard he was very complimentary of my performance, and that was the first indication that I didn’t ruin the movie,” Leto said. “I did tell people this when I was making it that it’s either going to be the worst thing I’ve ever done or maybe one of the best, because I thought that I was taking a risk, and when that happens it can land either way. But I feel very happy and very fortunate.”

This is Leto’s first nomination at the Globes since way back in 2014 when he won the Globe and the Oscar for “Dallas Buyers Club.” And though he’s taken his fair share of risks in his career, he explained that this one in “The Little Things” — where at times he looks unrecognizable — really stretched him.

“When you put on a nose and teeth and eyes and a walk and talk and throw it all together you have the opportunity to cross that line, but we wanted to just dance right around the line and not cross it,” Leto said. “There’s an opportunity to cross it, but it’s important to take great risk and to fail. I failed so much throughout the research and discovery even in shooting. You’d fail five takes, and all you need is one. So it’s kind of fun to get a great response from audiences that are watching the movie and having a good time with the character. That feels good because we pushed things pretty far.”

Leto called his co-stars Washington and Malek “comrades” and “partners in crime” who demonstrated a lot of faith and support in what he was doing.

“They could obviously see how transformational the role was, how physical it was, and they really believed in me and that was a great gift they gave me for having that faith in me,” Leto said.

In addition to the upcoming releases of “Morbius” and “Zack Snyder’s Justice League,” Jared Leto has a busy period coming up that includes working on Ridley Scott’s “Gucci” and a limited series about the company WeWork for Apple, not to mention his big priority of writing more music for his band 30 Seconds to Mars. Now that he’s back in the thick of awards season, has he ever been this busy before?

“Yeah. I’ve always been busy. But it’s important too to find some quiet, some downtime, some simplicity. That’s really important,” he said.

“The Little Things” opened in theaters and on HBO Max on Friday. Check out the trailer for the film here.