Jason Miller, a spokesperson for former President Donald Trump, has been ordered by a federal judge to pay Gizmodo Media Group almost $42,000 in legal expenses after two failed attempts to sue the company.

In his first legal attempt, Miller claimed a 2018 viral story from the now-defunct website Splinter titled, “Court Docs Allege Ex-Trump Staffer Drugged Woman He Got Pregnant With ‘Abortion Pill'” had cost him his contract as a political commentator for CNN. Miller attempted to secure $100 million from G/O media in the original suit, but a federal judge ruled that story had been accurately reported, making Miller’s claims moot.

The story laid out the details of Miller’s divorce from ex-wife A.J Delgado, who he met during the campaign in 2016. Delgado’s legal team alleged that Miller had an affair with a woman he met at an Orlando strip club and when the woman found out she was pregnant, Miller dosed her with an abortion pill without her knowledge, leading to the termination of the pregnancy, and almost killed the woman. 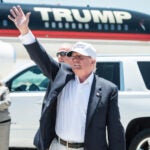 In a statement posted to his Twitter at the time, Miller claimed, “There is no validity to the false accusations made in the document Arlene ‘AJ’ Delgado filed herself, without an attorney.”

In his second attempt at the suit last month, Miller argued that those court documents weren’t admissible. But last month a panel of judges ruled that they were protected under New York fair reporting privilege and upheld the 2019 decision.