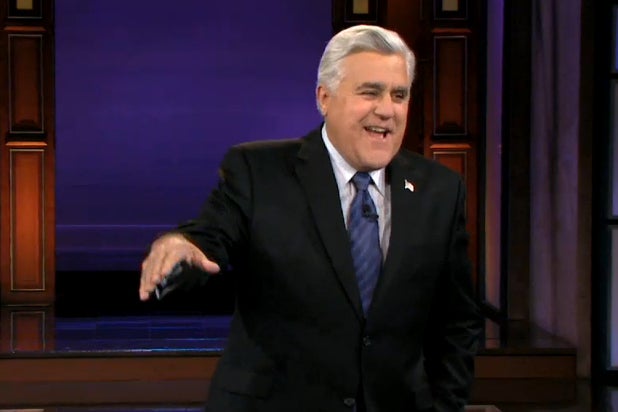 Jay Leno opened his final “Tonight Show” monologue on Thursday by taking a few shots at NBC, as well as some other favorite targets.

“I don’t care,” he repeated, before taking another (probably) playful swipe at his network. “Well, tonight is the last show for real; I don’t need get fired three times,” Leno quipped. “I get the hint. I get the hint.”

But then Leno’s mood turned to graciousness, faux as it may have been for the sake of the punchline: “I got to tell you, the outpouring from people. It’s really been touching. Today Anthony Weiner sent me photo of his penis looking sad.”

“Twenty-two years, that’s a long time,” the exiting host said. “Here’s how long it was: When I started hosting, marijuana was illegal, and you could smoke cigarettes anyplace you wanted.”

Leno added: “Twenty-two years ago, there was no Craigslist. Serial killers had to meet their victims the old-fashioned way, at the bus station at midnight.”

See photos: From Steve Allen to Jay Leno – All of ‘Tonight Show’s’ Hosts and Sidekicks Before Jimmy Fallon

As well as: “So much has happened in the last 22 years. You know the saddest part of all, O.J. never found the real killers.”

And of course: “When I started hosting, Justin Bieber wasn’t even born yet. That’s why we call those the good ol’ days.”

Even the President, who as Leno’s guest was the first ever sitting president to appear on late-night TV, was not immune to the veteran comic’s playful wrath: “The worst thing about losing this job, I’m no longer covered by NBC,” Leno said. “I now have to sign up for Obamacare.”

Leno’s final guest ever was Billy Crystal — the man who Leno hosted on his very first “Tonight Show” in 1992.

Jimmy Fallon takes over “The Tonight Show”on Feb. 17, when his first guests will be Will Smith and U2.