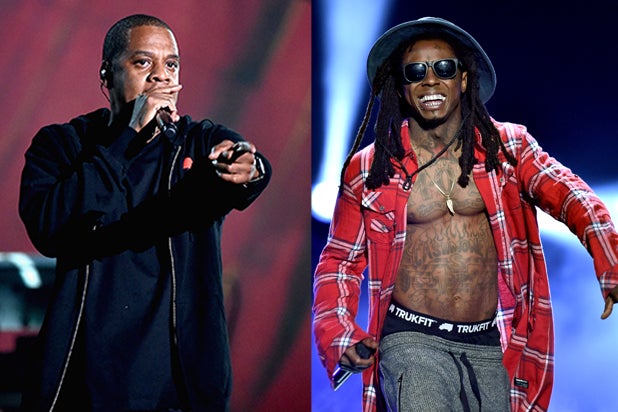 Jay Z can add a new lawsuit to his list of 99 problems.

The hip-hop mogul’s streaming service Tidal has been slapped with a $50 million lawsuit filed by Lil Wayne’s label Cash Money Records over music released by Weezy on Tidal.

The suit, filed in New York Supreme Court on Thursday, actually lists Aspiro AB, WiMP Music AS and Wimp, Inc. —  described as owners and/or operators of Tidal — as defendants.

The suit alleges that Birdman-founded Cash Money Records struck an exclusive recording deal with Lil Wayne — real name Dwayne Michael Carter — in 1998, an agreement that was violated by Tidal’s release of the rapper’s 2014 song “Glory” and earlier this month, his “FWA” album.

“FWA” streamed on Tidal July 3, and included 16 songs that had not yet been released by the label.

The lawsuit claims that Tidal poached Lil Wayne in “a desperate and illegal attempt to save their struggling streaming service.”

Perhaps even worse, the complaint cites “tepid reviews” for “FWA” including a Spin review that called the album an “uneven grab bag that quickly goes awry and fails to cohere.” Ouch.

(Full disclosure: The lawsuit also cites an article on Tidal published by TheWrap, which is not a party to the suit.)

Cash Money says it has invested heavily in Lil Wayne’s career, paying him “tens of millions of dollars.”

Claiming tortuous interference with contract, unfair competition, conversion and other counts, the suit is asking for monetary damages of no less than $20 million and $30 million in punitive damages. Cash Money also wants an injunction ordering the defendants to remove Lil Wayne’s music from Tidal.

A spokesperson for Jay Z has not yet responded to TheWrap’s request for comment.