“Hillbilly Elegy” author J.D. Vance was dragged for a tweet Tuesday and cried “literal fake news” after the fact.

Here’s what went down: Vance, who occasionally appears on Fox News and wrote a popular memoir about his upbringing that questions whether poor Americans like those in Appalachia are responsible for their own circumstances, tweeted, “I’m in DC today and just saw a group of girls on the Potomac rowing—outside in the sunshine—all of them with masks on. Just totally insane.”

At press time Wednesday, he was on the receiving end of what we call “a ratio” — that is to say, responses to his post far outnumbered straight-up retweets and likes. The tweet had 671 retweets and more than 5,000 likes. Comparatively, it had over 8,000 replies and almost 2,000 quote-tweets. Simply put, people were much more likely to offer their own opinions than to co-sign his. 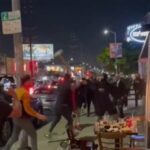 “Living in a society where children are expected to wear masks while exercising in the sunshine absolutely affects me and my family. So yeah, I care,” he shot back.

Ohio political reporter Karen Kasler tweeted that Vance — who has yet to announce any formal campaign plans but is expected to run for Senate — called the girls “insane,” which the author also took issue with.

“This is literal fake news. I didn’t call the girls insane. I’m sure they were doing what they were told. I think our society is insane for expecting children to wear masks outside while exercising,” he insisted.