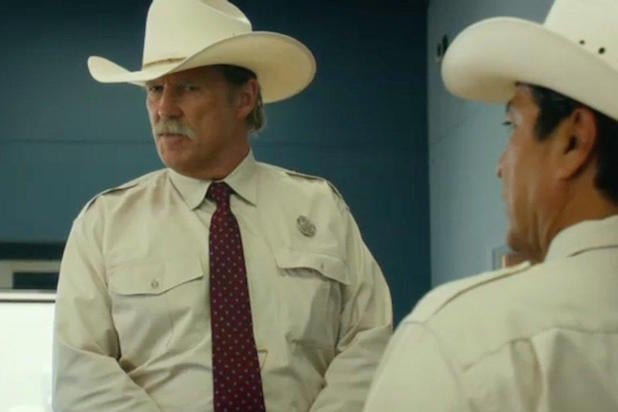 When you talk to Jeff Bridges about one of his films, he won’t talk about himself. He’ll talk about everyone else.

After scoring his seventh Oscar nomination — fourth in a supporting role — for his work as the crass but dedicated Texas Ranger Marcus Hamilton in “Hell Or High Water,” Bridges spoke to TheWrap Tuesday morning about all the people who helped him craft his performance, from his co-star Gil Birmingham to screenwriter Taylor Sheridan all the way to the film’s editor, Jake Roberts.

But before all of them, he talked about the real-life Texas Ranger who became the basis for Marcus Hamilton.

“There was a wonderful ranger, a very notable Texas Ranger named Joaquin Jackson who was very close to me on the set,” said Bridges, who won the best actor statue in 2010 for “Crazy Heart.” He’s no longer with us. He passed away not very long ago. But man, just being with that guy really informed my character and I owe a lot of my success playing that character to him.”

Jackson is known down south as one of the most decorated and well-known lawmen ever to serve with the Rangers. Appearing on the cover of Texas Monthly in 1994, tales of his exploits on the job turned him into a local legend and allowed him to build a side job in the film industry playing minor police roles and serving as a consultant on films like “Hell Or High Water.” Jackson died on June 15 last year, one month after the movie had its world premiere at Cannes.

But Jackson wasn’t the only inspiration for Marcus Hamilton; he was also inspired, as were all the other characters, by the personal life of Sheridan. Bridges said he could easily see Sheridan’s personal experience with the hardships of living in working class Texas in the script and sought to do justice to his story.

“Taylor is from Texas and his cousin, Parnell McNamara, was a marshal going into retirement and I was able to talk to him. He helped me out a lot as well with forming the character,” he said. “Taylor himself is in the film … he’s the guy driving the cattle across the road.”

Once he had his own character down, the next step for Bridges was to develop Hamilton’s relationship with his partner, Alberto Parker, played by Gil Birmingham. In “Hell Or High Water,” Parker and Hamilton work together to chase down the robbers responsible for a slew of bank stickups across the state, but they also leave time for some musings about the past and future of Texas and for Hamilton to make some racial jokes at Parker’s expense that many liberals would certainly label as “problematic.”

To build Hamilton and Parker’s relationship, Bridges says he and Birmingham spent a lot of time on set sharing their passion for music and playing guitars. This team-building exercise got some help from director David Mackenzie, who invited the cast to see him and Jake Roberts, who is nominated for an Oscar for Best Film Editing, put the footage together.

“What David would do every weekend is that he would invite the cast and crew to this big log cabin and he would show us all the work we did that week. It gave us a chance to all get together, and that’s not something that you see much in film these days,” he said.

“So Gil and I would go to the cabin and play guitar together while they were working. Gil was such a great actor to work with. It’s so hard to separate the accolades that I’ve gotten from Gil’s work, because we did it together.”

Also Read: Poker Chip Bailout: What Donald Trump and 'Hell or High Water' Have in Common

Though “Hell Or High Water” isn’t currently considered to be a top contender by many awards handicappers, it stands out as one of the most politically-charged Oscar contenders at the dawn of the Trump era. It tackles racial tensions, land struggles, and the obstacles that financial institutions put in the way of everyday folks trying to make ends meet in one of the most conservative areas of America. Ultimately, though, Bridges hopes that the message moviegoers of all walks of life take from the film is that “we’re all in this together.”