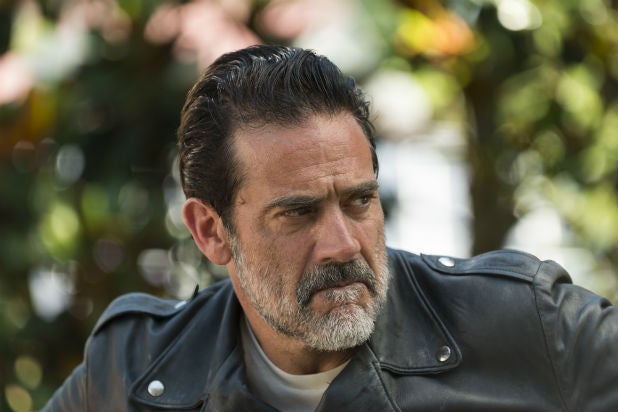 “The Walking Dead” star Jeffrey Dean Morgan had a short and sweet response to the growing uproar surrounding a T-shirt promoting the AMC series in which he stars.

“Holy crap people are stupid,” Morgan tweeted, along with a link to TheWrap’s own story about a “Walking Dead”-themed shirt that was removed for sale by a British clothing retailer after a complaint that the shirt was “racist” and “fantastically offensive.”

The shirt in question bore the image of a baseball bat and the message “Eeny Meeny Miny Moe” — a reference to a scene from the AMC zombie drama in which Negan (Morgan) is deciding who in the protagonist group to kill.

In the scene, Negan continues the phrase with, “Catch a tiger by his toe” — though, historically in the U.K. the rhyme has employed the N-word rather than the word “tiger.”

The historical use caused shopper Ian Lucraft to complain after spotting the shirt at a branch of the U.K.’s Primark retail chain.

“We were shocked when we came face to face with a new T-shirt with a racially explicit graphic and text,” Lucraft told the Warwick Courier. “It was fantastically offensive and I can only assume that no one in the process of ordering it knew what they were doing or were aware of its subliminal messages.”

In a statement to TheWrap, a Primark spokesperson offered an apology for the shirt, saying that any offense that the shirt caused was “wholly unintentional.”

“The T-shirt in question is licensed merchandise for the U.S. television series, ‘The Walking Dead,’ and the quote and image are taken directly from the show,” the spokesperson said. “Any offense caused by its design was wholly unintentional and Primark sincerely apologizes for this. Primark has pulled the product from sale.”

Back to Morgan’s tweet: It’s not entirely clear who the actor is calling “stupid” — whether it’s the complainer, the retailer, all of the people paying attention to the T-shirt hullabaloo, or even all of the above.

Tell us what you think in the comments below or tweet @TheWrap.