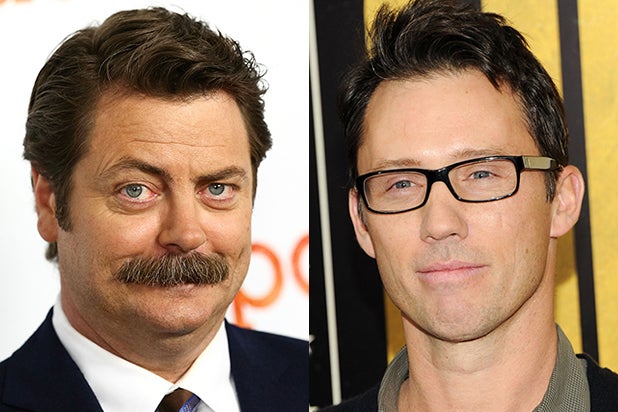 Jeffrey Donovan is packing his bags for “Fargo,” and Nick Offerman could be joining him.

“Burn Notice” star Donovan is nearing a deal to join the second season of FX’s anthology series “Fargo,” while “Parks and Recreation” star Offerman has an offer to join the cast, though he’s not currently in negotiations, multiple individuals with knowledge of the castings told TheWrap on Wednesday.

Donovan, whose credits also include “Crossing Jordan” and “Law & Order,” has been cast in the role of Dodd.

The second season of the adaptation of the Coen Brothers’ iconic film will also feature Rachel Keller, who will play the role of Simone in the Noah Hawley-created series. Relative newcomer Keller also stars in the comedy “Hollidaysburg,” opposite Tobin Mitnick.

In addition to the castings of Donovan and Keller, another individual with knowledge of the situation told TheWrap that Mike Bradecich (“Mighty Med”) and Allan Dobrescu are also in contention for roles in the series, which starred Billy Bob Thornton, Martin Freeman, Colin Hanks and Allison Tolman in its first season.

A spokesman for FX did not immediately respond to TheWrap’s request for comment.

Also read: Colin Hanks Reveals Why 'Fargo' Needed to Go Back in Time for Season 2

Should Offerman join the cast, he would play the role of Carl. With “Parks and Recreation” preparing to enter its final season, “Fargo” would be an enticing proposition, though he has not yet made up his mind about signing on for the series.

As Hawley revealed at the Television Critics Association press tour in July, the second iteration of “Fargo” will take place in 1979 and feature a young Lou Solverson (played by Keith Carradine in the first season) as a 33-year-old veteran who recently arrived home from the Vietnam war.

Hawley added that the second season will draw inspiration from the Coen Brothers films will be inspired by “Fargo,” “Miller’s Crossing” and “The Man Who Wasn’t There.”