Former White House press secretary Jen Psaki disavowed any association with numerous parody Twitter accounts that have popped up in her name the past few weeks, in the wake of a racy tweet posted Saturday.

“Hate to disappoint, but…This is not my account,” Psaki tweeted on Sunday. “This is not approved by me on any level. (And there have been a number of these in the last few weeks).”

“Anything with ‘Parody..’ in it,” she reminded her followers, “means it is someone tweeting with an image and twitter account that looks like me and is not.”

The satirical account in question had tweeted “Jen Psaki’s MSNBC show is going to be the highest rated ever,” over a screenshot of a fake tweet that read, “President Biden might need kneepads for riding his bike, but the last guy needed kneepads for visiting the Kremlin.” 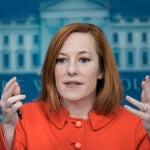 While the fake tweet is designated as a “parody,” it’s easy to miss, especially because it shares a profile picture and blue check with Psaki’s real account.

The parody tweet was obviously referring to President Biden falling off his bike yesterday in Delaware (although he isn’t wearing kneepads in video footage of the accident).

After serving as press secretary for the first 16 months of Biden’s administration, Psaki will join MSNBC later this year. In the fall, the former Obama communications director will appear on NBC platforms and streaming services before headlining her own original streaming series in 2023. She’ll also contribute to the network’s coverage of the midterm and 2024 presidential elections.

“Fact-based and thoughtful conversations about the big questions on the minds of people across the country have never been more important, and I’m thrilled to join the incredible MSNBC team,” Psaki said following last month’s announcement. “My time in government, from the White House to the State Department, and years before that on national political campaigns will fuel the insight and perspective I bring to this next chapter. I can’t wait to create a space on streaming where we break down the facts, get to the bottom of what’s driving the issues and hopefully have some fun along the way.” 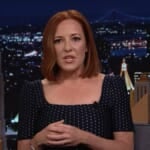