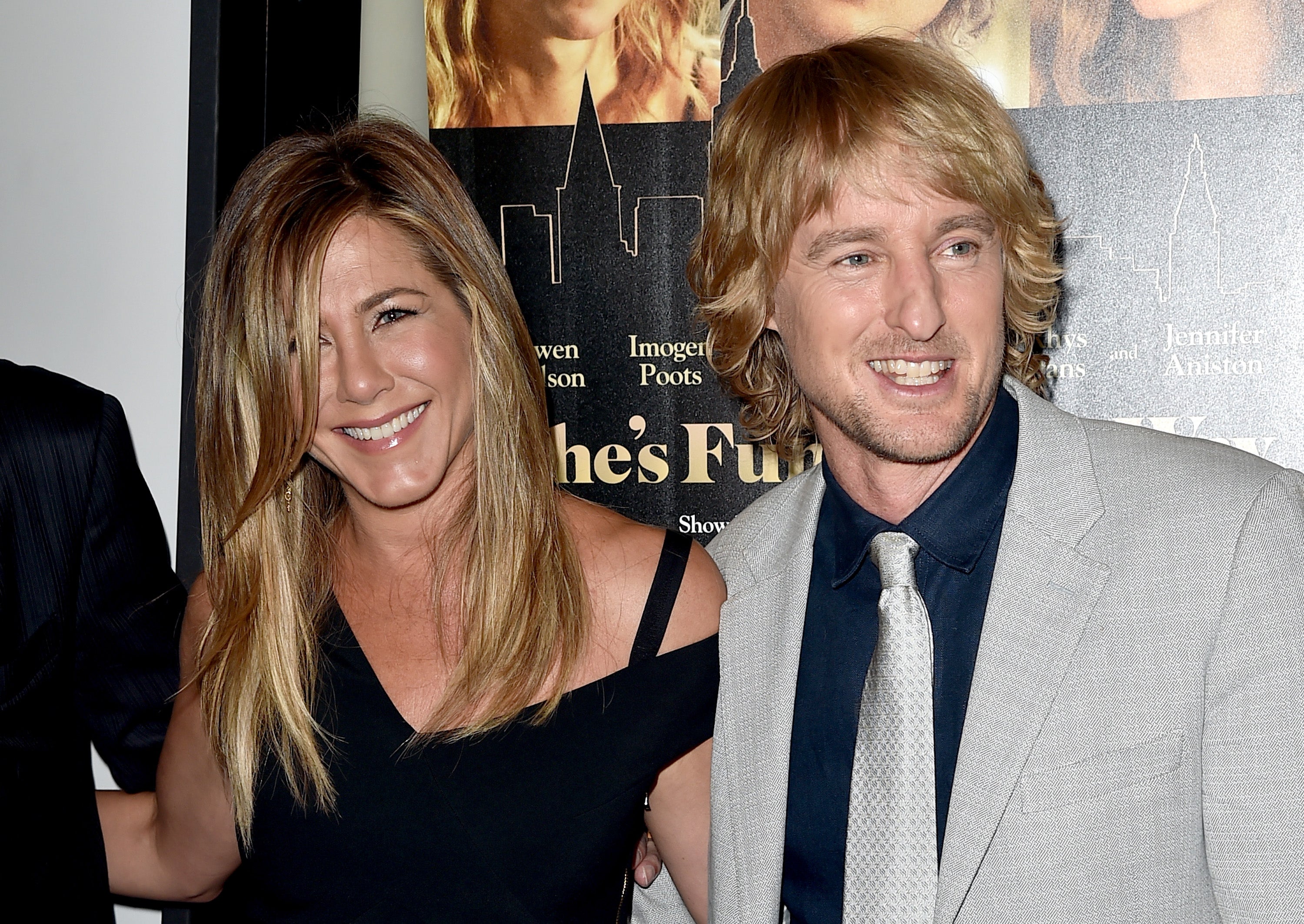 Newlywed Jennifer Aniston made her first public appearance on Wednesday since her fairytale wedding to Justin Theroux at their Bel-Air home on Aug. 5.

Looking tanned and relaxed in a black jumpsuit after their well-documented honeymoon to Bora Bora, Aniston joined her costars for the Los Angeles premiere of “She’s Funny That Way” at the Harmony Gold Theater on Sunset Blvd. in Hollywood.

Aniston, Owen Wilson, Kathryn Hahn and Imogen Poots star in the Peter Bogdanovich-directed comedy that shows us how small the world really is.

Notably absent — from the red carpet, at least  — was Aniston’s new hubby, who was shooting the second season of “The Leftovers” in Austin — but the actress appeared more than happy to hang out with her former “Marley & Me” leading man, Wilson, with her elegant gold and diamond wedding ring sparkling on her left hand.

Along with Aniston and Wilson, cast members in attendance included Poots, Kathryn Hahn, Ileana Douglas, Lucy Punch, Colleen Camp and Quentin Tarantino, who has a small but funny cameo at the end of the film.

Others at the premiere included Jeff Bridges and Cloris Leachman, who sat next to each other more than 40 years after co-starring in Bogdanovich’s “The Last Picture Show.” Bill Paxton, Jane Seymour, Robert Forster and Mena Suvari also attended.

The Lionsgate Premiere film explores the interconnected lives of the characters as director Arnold Albertson (Wilson) casts his call girl, Isabella “Izzy” Patterson (Poots), in a new play to star alongside his wife (Hahn) and her ex-lover Seth Gilbert (Rhys Ifans). Jennifer Aniston is Izzy’s therapist who is in a relationship with Arnold’s playwright Joshua (Will Forte), who is also crushing on Izzy.

The film calls for an extremely messy love tangle, while everyone is trying to hide their relationships from one another. Other cast members include Douglas, Debi Mazar, Erin Heatherton, Graydon Carter, Melanie Hill, Cybill Shepherd and Richard Lewis.

Bogdanovich directed the screwball comedy, and shared the screenplay credit with Louise Stratten. During his opening remarks at the premiere, the director offered spot-on impersonations of Cary Grant and Jimmy Stewart, two of the many film icons he spent time with during his days as a journalist, critic and young filmmaker.

The movie was produced by Lagniappe Films and Venture Forth; it is being distributed in the U.S. through Lionsgate Premiere.