The 2019 film adaptation of “Cats” has been called many things: a disaster, a nightmare, a $95 million hairball. But one of its stars, Jennifer Hudson, thinks “cult classic” will be added to that list one day.

In an interview published Wednesday, the singer-actress sat down with Total Film to discuss her latest project, the Aretha Franklin biopic “Respect.” She was pleasantly surprised when the interviewer also asked her about the world’s less-than-positive reaction to her last music-filled film.

“I loved that you asked about ‘Cats!’” Hudson exclaimed.

“You know what? I think it was a bit overwhelming,” she told the outlet about the movie’s reception. “It’s unfortunate that it was misunderstood. I think later down the line, people will see it differently. But it is something I am still very proud of and grateful to have been a part of.”

Hudson went on to explain that she cherished the experience so much that it inspired her to get two cats of her own — one named after her character, Grizabella, and the other named after Macavity, the menacing, teleporting feline portrayed by Idris Elba. “They are the best thing I’ve ever had. I love them so much,” she said.

“I had a really great time working on that weird-ass movie,” she told Vanity Fair in January 2020.

Not all of Hudson and Swift’s fellow jellicle cats were purring the movie’s praises, though. Rebel Wilson, who played Jennyanydots, ripped the movie to shreds during her 2020 BAFTA speech.

“The red is from that one time I didn’t win Miss Australia,” she said, referring to the red and black dress she had on. “And the black is from a funeral I just went to for the feature film ‘Cats.’” 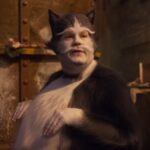 Also Read:
James Corden Has No Idea if There’s Actually a ‘Butthole Cut’ of ‘Cats’ (Video)

Wilson and James Corden, who played the bumbling Bustopher Jones, presented an award at the 2020 Oscars together while dressed as their “Cats” characters, where Corden also quipped at the film’s expense.

“As cast members of the motion picture ‘Cats,’ nobody more than us understands the importance of good visual effects,” he said.

The Universal Pictures flick also featured Ian McKellan, Judi Dench and Jason Derulo. But even those luminaries could not burn bright enough to make for a critical or commercial success. “Cats,” directed by Tom Hooper (“The King’s Speech,” “Les Miserables”), currently boasts a “rotten” 19% score on review aggregator site Rotten Tomatoes. But hey, at least we can all agree the movie wasn’t the worst plague to hit the U.S. in late 2019.