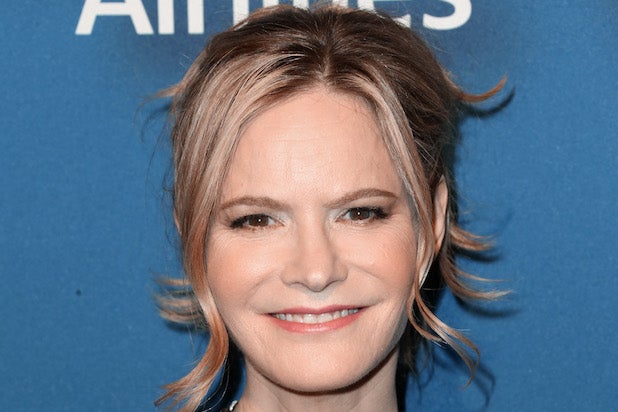 Fresh off her first Oscar nomination for “The Hateful Eight,” Jennifer Jason Leigh is in early talks to join Natalie Portman, Gina Rodriguez and Tessa Thompson in Alex Garland‘s “Annihilation,” multiple individuals familiar with the Paramount project have told TheWrap.

There’s no deal in place yet for Leigh, though she does have the offer and appears eager to join the all-female ensemble after working with an all-male ensemble on “The Hateful Eight.”

Leigh is no stranger to working with Rudin, as the two of them produced “Greenberg” together. Rudin also produced “Margot at the Wedding,” in which Leigh starred opposite Nicole Kidman.

The actress is in the midst of a career renaissance thanks to her acclaimed voice work in Charlie Kaufman‘s Paramount release “Anomalisa” and her bloody-good turn as Daisy Domergue in Quentin Tarantino‘s “The Hateful Eight.” She next stars alongside Bella Thorne in “Amityville: The Awakening,” and she’s also playing Lady Bird Johnson opposite Woody Harrelson in Rob Reiner‘s political drama “LBJ.”

Meanwhile, British novelist and filmmaker Garland is coming off the success of “Ex Machina.”