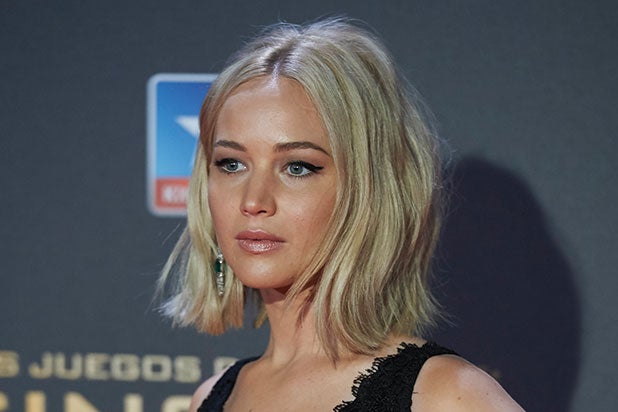 Jennifer Lawrence‘s booming movie career helped her rake in $52 million last year, but it hasn’t helped her score any dates.

“No one ever asks me out,” she told Vogue. “I am lonely every Saturday night. Guys are so mean to me. I know where it’s coming from, I know they’re trying to establish dominance, but it hurts my feelings. I’m just a girl who wants you to be nice to me. I am straight as an arrow. I feel like I need to meet a guy, with all due respect, who has been living in Baghdad for five years who has no idea who I am.”

In the interview, Lawrence also talked about her political views, her relationship with director David O. Russell (with whom Lawrence worked on “Silver Linings Playbook” and “American Hustle”) and reflected on her nude photo leak from last year.

Here are 8 more things we learned about the movie star from her new interview with Vogue:

1. On her indulgences: “Um, private jets? I have such a hard time flying commercial. I always want to — it’s cheaper, it’s easier — but there can be 300 perfectly lovely people at the gate and one crazy person who ruins it for everyone, so flying private is great because I don’t have to worry.”

2. On wanting to get married: “I can’t wait to be married,” she says. “I feel like if I find that one person who I want to spend the rest of my life with, who I want to be the father of my children, that I would absolutely not fuck it up.” She waits a beat. “But I’m also not banking on that.”

3. On her gender pay gap essay: “What I was trying to say is that we’re not victims. I am holding my own self back. The men aren’t to be blamed for asking for more and getting it.” As we’re all discovering, Lawrence is constitutionally unable to not say what she thinks. She herself calls it “a taboo impulsivity: If you shouldn’t say it, it’s all of a sudden coming out of my mouth.”

4. About director David O. Russell: “He has given me a life, creatively, that I would have never known, what it feels like to really act, to be scared out of your mind on set and have no idea what’s going on. There are things that I’ve learned about myself that would have taken 20 years that he taught me in five. Because I’m not so sensitive, we can really talk, like, man-to-man, Sometimes he accidentally refers to me as he or him. But he really respects and understands women, and by that I mean he doesn’t treat a woman any differently than he’ll treat a man. He would never tiptoe around a woman.”

5. On life after “Hunger Games”: “It doesn’t feel like I’m being towed behind something anymore. It feels like I’m towing it.”

6. On success and inevitable failure: “It’s scary, because it will go away. I will have a flop.”

7. On her nude photo leak: “It was all pain and no gain. But I don’t dwell on it unless someone brings it up. Have you seen me naked?”

8. On politics: “I was raised a Republican, but I just can’t imagine supporting a party that doesn’t support women’s basic rights. It’s 2015 and gay people can get married and we think that we’ve come so far, so, yay! But have we? I don’t want to stay quiet about that stuff … My view on the election is pretty cut-and-dried: If Donald Trump is president of the United States, it will be the end of the world. And he’s also the best thing to happen to the Democrats ever.”