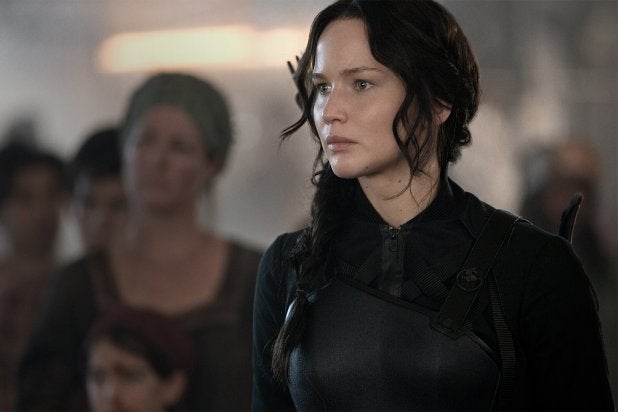 Jennifer Lawrence is already a critically acclaimed actress, and now she’s poised to add Billboard-charting singer to her impressive résumé. The “Hunger Games” star performed an original song in the film and on its soundtrack, and now industry forecasters are predicting sales of approximately 150,000 downloads in the U.S. for the week ending Nov. 30, according to Billboard.

That should launch Lawrence into the top 40 of Billboard’s Hot 100 chart for that week. She joins Anna Kendrick, who found herself an unlikely actress on the singles charts with “Cups” from “Pitch Perfect.” That single reached No. 6 on the charts in 2013, going triple platinum.

“The Hanging Tree,” performed by James Newton Howard and featuring Lawrence, was written by “Hunger Games” author Suzanne Collins with Jeremiah Fraites and Wesley Schultz of The Lumineers.

On Nov. 30, Billboard announced that Lawrence’s “The Hanging Tree” had achieved Top 20 debuts in both the U.K. and Australia, outperforming expectations in the former, where it landed at No. 14. Lawrence debuted even higher in Australia, coming in at No. 12.

The soundtrack for “The Hunger Games: Mockingjay – Part 1” was released Nov. 24. “The Hanging Tree’s” ranking on Billboard’s Hot 100 will be determined in part by its digital sales. Other factors include airplay, physical sales and streaming data.

“The Hunger Games: Mockingjay – Part 1” is in theaters now.