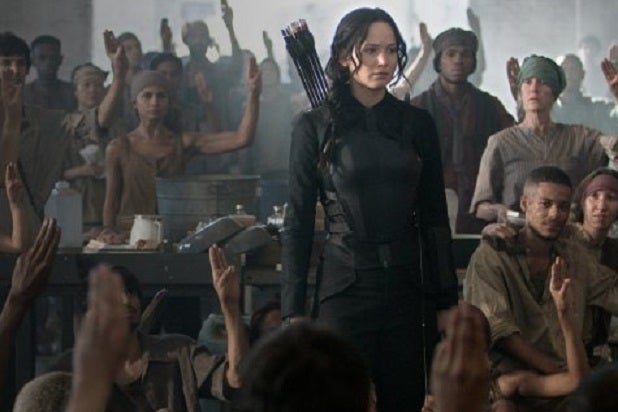 Jennifer Lawrence and “The Hunger Games: Mockingjay – Part 1” hit the box-office bulls-eye over the Thanksgiving weekend, generating $82.6 million over the five days.

It didn’t match the record-breaking $110 million that “The Hunger Games: Catching Fire” took in last Thanksgiving, but it was the third-highest haul ever for the holiday, and an impressive showing nonetheless. Lionsgate’s “Mockingjay” crushed the competition and showed staying power, dropping off just 53 percent from its $121.8 million opening, and has taken in more than $225 million domestically.

The strong second week is a shot in the arm for “Mockingjay,” which opened to $121.8 million last week, considerably under those of the first two “Hunger Games” movies. Also helping is the powerful overseas performance of the adventure saga. It added $67 million from abroad this weekend and has taken in more than $254 million from foreign and $480 million globally in 10 days of release.

The massive second week for “Mockingjay” left the rest of the field scrambling for leftovers. The weekend’s two wide openers both came in about $10 million under projections. DreamWorks Animation’s PG-rated family film “Penguins of Madagascar” finished second with $36 million for distributor Fox. And the R-rated New Line comedy “Horrible Bosses 2” came in fourth with $22.6 million for Warner Bros.

“Big Hero 6” was part of the problem for “Penguins.” The Disney Animation family film is in its fourth week, but still finished third with $26.2 million. That lifts the domestic total for “Big Hero” to $167 million.

“Penguins,” a spinoff from the blockbuster “Madagascar” franchise, received an “A-” CinemaScore from first night moviegoers. That should help the $132 million “Penguins” in the weeks to come, when it has the family market largely to itself, with the exception of “Big Hero.”

The crowd for “Penguins” was 52 percent female and 58 percent under the age of 25. It got a solid boost from 3D, which accounted for 24 percent of the grosses.

“We knew (“Big Hero”) was going to be there all along, and it performed as expected, so it’s not a surprise for us,” Fox distribution head Chris Aronson told TheWrap. “I think that more than anything, we fell victim to a soft marketplace.”

The overall box office was down 23 percent from last year, when “Catching Fire” and “Frozen” dominated. It marked the fourth straight year that a Lionsgate movie has won the Thanksgiving box office, on the heels of “Catching Fire” and two “Twilight” movies — “Breaking Dawn” parts 1 and 2.

The production budget for “Horrible Bosses 2” was $42 million, so it’s no disaster for Warner Bros. But the studio had hoped for more, since the original opened to $28 million in July of 2011 and broke out with more than $200 million worldwide.

It wasn’t well reviewed — 35 percent on Rotten Tomatoes — but moviegoers gave it a “B+” CinemasScore. The audience broke down 51 percent male and 59 percent over the age of 25.

And even though it was disappointing, the $15.7 million three-day total for “Horrible Bosses” ranks as the best-ever for an R-rated movie at Thanksgiving, a holiday traditionally given over to family fare. The $12.3 million that “Bad Santa” managed in 2003 was the previous high.

Warner Bros. distribution chief Dan Fellman thought the release date was worth a try, even if it didn’t pan out.

“The family angle may have hurt a little,” Fellman told TheWrap. “But this was always going to be counterprogramming, and it will be over the next few weeks too, so we think we’ll get to a good place with this picture.”

Paramount’s “Interstellar” continued to get a big boost from IMAX. The giant screens provided $7.8 million of its grosses — a record 36 percent — and all 20 of the film’s top grossing sites were IMAX. The Matthew McConaughey space epic is up to $147 million domestically, and has crossed $500 million worldwide. Warner Bros. is distributing abroad.

Which side of the tracks will "We're the Millers" land on Jennifer Aniston's resume?