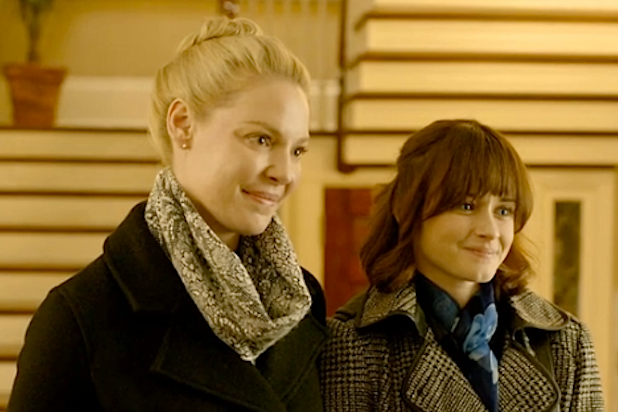 Brought to the screen by the combination of a successful Indiegogo crowdfunding campaign and no small amount of old-school indie-film pluck, writer and director Mary Agnes Donoghue’s “Jenny’s Wedding” is a warm, agreeable coming-out romance buoyed by strong performances from its actors even as it explores fairly shallow waters. Katherine Heigl stars as the titular Jenny, devoted daughter of her fireman dad Eddie (Tom Wilkinson, fine as ever in a lower gear) and mom Rose (familiar if unheralded actress Linda Emond).

Jenny, her siblings (including Anne, played by Grace Gummer) and her parents have a happy, messy life together, like any other family. But after years of being asked when she’s going to find a nice guy and settle down, Jenny must face the fact that she needs to tell her family and parents how she’s found the right person — and that it’s not the right guy.

“Jenny’s Wedding,” from its title to the end credits, is decidedly free of surprises. Yes, Jenny’s more traditional mom and dad will react — badly — when told that not only is Jenny a lesbian, but that she also wants to marry her longtime partner and “roommate” Kitty (Alexis Bledel). Between the resolutely conventional script and the somewhat flat direction, you can’t help but wonder if this is a case where one person took on the dual tasks of writing and directing and thus removed the possibility of being pushed towards greatness by another collaborator’s vision and ideas. (While “Jenny’s Wedding” is resolutely independent, Donoghue is hardly a newcomer; her other screenwriting credits include “Beaches” and “White Oleander.”)

For all of the film’s clunky missteps and tentative tip-toeing, though, the cast still shines through. Gummer’s younger sister character seems to have a bad case of Jan-from-“The-Brady-Bunch” disease, considering herself unloved and unwanted next to the Marsha-like Jenny. When Anne stops worrying about her sister’s happiness and her parent’s attitudes and takes her life into her own hands, however, it’s gripping and intriguing viewing. Wilkinson and Emond also bring no small amount of skill and grace to their work as a couple who seem to be burying all of their long-standing problems under a comfortable blanket of what’s best for the kids.

Much of the dialogue is painfully opaque and unidirectional: Eddie and Rose, when finally informed of the truth, argue about which of them specifically Jenny is rejecting through her lesbianism, while the soundtrack repeatedly leans on Mary Lambert’s “She Keeps Me Warm,” a song best known for its incorporation into Macklemore’s “Same Love,” a decision that functions less as a music cue and more as the sonic equivalent of a bright yellow highlighter.

There are flashes of fire and passion in the otherwise rote “Jenny’s Wedding”; Heigl’s best scene comes as she loses her temper with her father’s cluelessness utterly and completely at a funeral, and the film could have used a lot more of that kind of incendiary feeling and less of the calm, slow-fizzle pacing it follows. Shot and set in Cleveland, the look of the film is all suburban simplicity — Pepto-Bismol pinks and tasteful furnishings — and there are plenty of comforting clichés to help the social-justice medicine go down, whether characters are changing their lives through actions captured in montage or a cavalierly homophobic neighbor gives Rose something wrong to push against so she can get back to loving her daughter.