We’ll take “Scandals That Could’ve Been Avoided” for $1200. Mike Richards is already out as the new host of “Jeopardy!” amid backlash over his past offensive remarks and everybody’s got jokes — and, of course, more suggestions for his replacement.

Richards informed the show’s staff that he was stepping down in an email Friday, writing that, “It has become clear that moving forward as host would be too much of a distraction for our fans and not the right move for the show.”

The behind-the-scenes saga has already distracted fans, though, with one Twitter user wondering how “Jeopardy!” of all shows came to fill the drama void left by “Game of Thrones.”

Richards will remain as executive producer and the show will return to its short-term guest hosts until a permanent one is chosen.

Production on the new season of the quiz show, which just began Thursday with Richards as host, was canceled today. Richards taped five episodes of “Jeopardy!” yesterday, all of which will air, an individual with knowledge of the situation tells TheWrap.

The resurfaced podcasts spurred wide calls for Richards’ removal, including a request for an investigation into his comments from the Anti-Defamation League. Conversely, his resignation from the show, at least from in front of the camera, has led to an outpouring of celebrations, “I told you so’s” and all-around trolling. 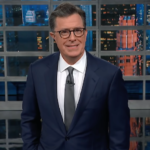 Here are some of the highlights.

And of course, here are the #JusticeforLeVar tweets–along with some other host suggestions.