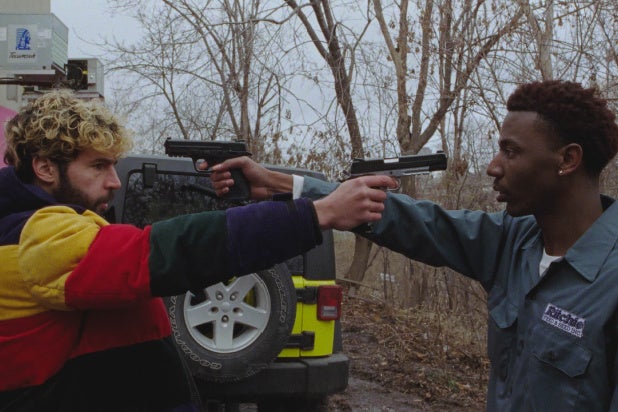 Annapurna Pictures has acquired the North American rights to “On the Count of Three,” the film starring and directed by comedian Jerrod Carmichael that premiered at this year’s Sundance.

The distributor acquired the film in a near $2 million deal, two individuals with knowledge told TheWrap. Annapurna will market and distribute the film with a partner to be announced shortly.

Carmichael and Christopher Abbott star in “On the Count of Three,” which is about two armed best friends who plan to take each others’ lives by the end of the day. The film also stars Tiffany Haddish, J.B. Smoove, Lavell Crawford and Henry Winkler in supporting roles. Ari Katcher and Ryan Welch wrote the screenplay, and the film is Carmichael’s feature directorial debut.

Also Read: 'On the Count of Three' Review: Jerrod Carmichael's Directorial Debut Is a Matter of Life and Death

The film earned some strong reviews out of Sundance as a dark comedy that doesn’t forget its grimly serious subject matter. TheWrap’s Alonso Duralde also singled out Carmichael’s sure hand behind the camera, even for a debut filmmaker.

“It’s very easy for an indie comedy about suicide to tumble into glibness, but Carmichael and his writers take these characters and their plights absolutely seriously,” Duralde wrote. “One of the best things that can be said about ‘On the Count of Three’ is that it forces viewers to dispel any certainty that its protagonists won’t wind up dead at the end, which provides the film with both integrity and unpredictability.”

“Megan’s commercial vision for daring independent films is unparalleled and we couldn’t feel luckier to find a home with her,” producer Adam Paulsen of Valparaiso Pictures said in a statement. “I was fortunate enough early in my career to witness first-hand how she championed SPRING BREAKERS in a way no one else saw, and most recently on ‘Sorry to Bother You’ and countless others. We’re thrilled for Megan to get behind the release.”

The film also went on to win the Waldo Salt Screenwriting Award for its writers Ari Katcher and Ryan Welch.