All 180 episodes of “Seinfeld” are now streaming on Netflix, and Jerry Seinfeld has marked the occasion in a most unusual way: by transforming into a human Lego not once, but twice.

Netflix offered up the first look at Lego-fied Jerry in a promo video released earlier on Friday. In it, the comedian revisits “Seinfeld’s” iconic set in Lego form as narrator Bryan Cranston exclaims, “He’s blocky! He’s stoppy! He’s one-half real organic matter! He has ‘c’ hands! And he’s every bit as funny as his human counterpart!”

The feel-good sitcom facade unravels from there, as Seinfeld declares, “But I don’t want to be a Lego,” to which Cranston evilly replies, “Sorry, Jerry, you have no say. We bought the series and we can do whatever we want with it. And you.” (Cranston also hilariously takes the opportunity to remind us that his “Seinfeld” character Tim Whatley appeared in six, not five, episodes of the show, thankyouverymuch.) 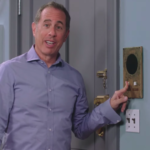 That brings us to Friday night, when Seinfeld appeared on “The Tonight Show” to continue promoting the sitcom’s new streaming home. After Fallon played the Netflix promo video, he found himself overcome with jealousy, telling his guest, “I want to be a Lego. Please?”

“OK, if you want, I can take you into the Lego world,” Seinfeld agrees.

You can probably guess what happens from there: Seinfeld and Fallon transform into blocky-bodied Lego men as the entire “Tonight Show” set around them also gets magically remodeled. Chaos ensues as they attempt to continue their interview but keep getting tripped up as they try (and fail) to sit down, drink water and keep all that plastic hair on their heads.

Check out the full bit in the video up top. 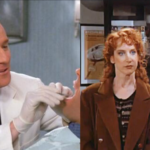