What’s the deal with this new “Seinfeld” promo? Oh, it’s footage shot by Jerry Seinfeld and Comedy Central to promote the iconic sitcom’s reruns moving exclusively to Comedy Central from their longtime home on TBS this October.

Though it had been known since 2019 that ViacomCBS’ MTV Entertainment had acquired the cable rights to the show beginning this fall in a deal with Sony Pictures Television, Wednesday is when the company announced that Comedy Central is the only one of its platforms that will air “Seinfeld,” thus becoming its exclusive linear home.

Watch the teaser, featuring Jerry Seinfeld playing “Seinfeld’s” Jerry Seinfeld, accepting a delivery of 180 episodes of the show to “Comedy Central,” aka his apartment. 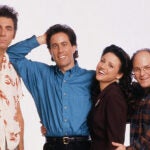 Netflix has the streaming rights to “Seinfeld” and will begin offering the 180-episode library on Oct. 1, which is more than a week before Comedy Central will debut the show with the “top favorite episodes as voted on by the fans in a countdown stunt on Saturday, October 9 with the series to begin airing on Comedy Central on Monday, October 11.”

ViacomCBS’ cable rights deal for “Seinfeld” was significantly less than Netflix’s streaming deal (as that is for “global rights” rather than “U.S. rights”) and more along the lines of other mega cable deals, like the cable portion of the “Office” and “Friends” deals, according to a source that spoke with TheWrap at the time the pact was made.

Created by Jerry Seinfeld and Larry David, the Emmy and Golden Globe-winning “Seinfeld” stars Jerry Seinfeld as a stand-up comedian whose life in New York City is made even more chaotic by his quirky group of friends who join him in wrestling with life’s most perplexing, yet often trivial questions. Co-starring are Julia Louis-Dreyfus as Jerry’s ex-girlfriend and current platonic pal, Elaine Benes; Michael Richards as Jerry’s eccentric neighbor, Kramer; and Jason Alexander as George Costanza, Jerry’s neurotic hard-luck best friend.

The series is a West/Shapiro Production in association with Castle Rock Entertainment. It is executive produced by Larry David, Howard West and George Shapiro.