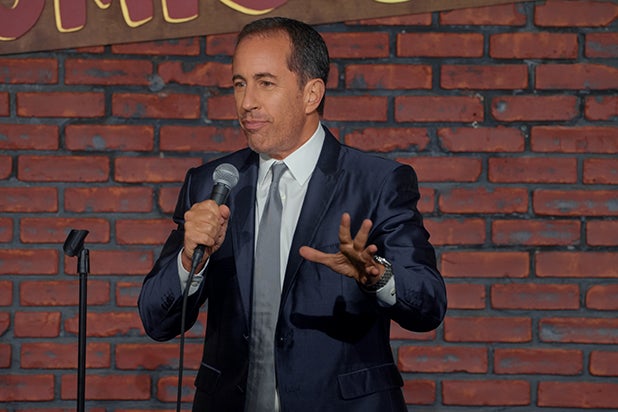 Jerry Seinfeld dusts off some of the best jokes from the early years of his career and presents them to a 2017 audience in his new Netflix stand-up special “Jerry Before Seinfeld,” resulting in a surprisingly introspective hour from the famously impersonal comedian. And that gesture toward self-reflection extended to a Q&A session Seinfeld did with Netflix’s Ted Sarandos following the special’s premiere screening in Los Angeles on Tuesday night.

The special traces Seinfeld’s career from the initial decision to pursue comedy through his first-ever show at The Comic Strip and his eventual appearance on Johnny Carson’s “Tonight Show,” famous at the time for being a benchmark moment in a comic’s success.

Interspersed throughout Seinfeld’s set are old home movies, archival footage of his early appearances and a surprisingly effective shot of Seinfeld sitting amid a sea of yellow legal pads, records of every joke he’s ever told.

It’s those legal pads, a meticulously collected and preserved chronicle of Seinfeld’s life as a stand-up, which make up “Jerry Before Seinfeld.” Every joke told in the special came from his time as an up-and-coming New York comic, long before his breakout sitcom.

“I looked at what I had from those years,” Seinfeld said. “I started trying to figure out which of this stuff might still work. And it was a slow, winnowing process. I tried tons and tons of stuff. That was the best of what still worked. Things that are kind of time proof.”

Also Read: 7 of the Worst TV Series Finales: From 'Seinfeld' to 'Girls' (Photos)

“There was a lot of stuff that I didn’t feel right saying, or that audiences didn’t,” Seinfeld continued. But with years of material to choose from, he was able to put together an hour’s worth of jokes that could make an audience laugh in any era. He spent four months doing nightly sets, honing and perfecting the jokes before they were recorded for the special at The Comic Strip — the same club where he got his start.

“The audience, they picked those jokes. That’s what they liked,” he said.

“I really find the moment when a stand-up set is working really well to be the most exciting,” Seinfeld said. “When you connect with that crowd and that room is rolling — and that room [at “The Comic Strip”] was so much fun to perform in, because I don’t usually get to do that in a small, tight room like that — there’s no feeling like it. It’s like surfing. You do it for the feeling.”

There’s a moment in the special, where Seinfeld is sitting in front of his childhood home, reflecting on what first drew him to comedy. “These people,” he says, admiringly referring to the comics he grew up watching, “they don’t respect anything.”

And though Seinfeld staunchly avoids any material that might be interpreted as confessional in the special, hints of that same attitude came through in his talk with Sarandos. He confessed that he continues to perform live because he “doesn’t like people” and stand-up “minimizes” those interactions. He said he never performed at Los Angeles’ famed Comedy Store because he wasn’t “needy” enough to get along with owner Mitzi Shore.

Most tellingly, he admitted it had been more than 30 years since he’d last performed at The Comic Strip because his relationship with its owners had soured.

“I was one of the people who made a big stink that we weren’t getting any money [back then],” he said. “Me and a couple other comedians sat down with the three owners of the three major clubs, and we told them — they were making tons of money in the ’70s — and we told them, ‘We feel we should get paid five dollars for our show.’ We thought that was solid, really good money. And they told us … they said, ‘You’re not worth five dollars.'”

“And I never forgot that,” he said. “That really bothered me.”

But Seinfeld, of course, would go on to become worth much more than that, thanks to years of dedication and hard work — years and years of filling those yellow legal pads with jokes.

It never escaped him, he said, that the job of a comedian is to write and tell jokes. So he would write new jokes all the time, a system that would eventually become legendary advice passed around by creative types struggling to find their process. A system as simple as “write every day.”

“This write every day thing is so ridiculous,” he said. “You’re a comedian and you’re going on every night for 20 minutes. That’s 23 hours and 40 minutes where you have nothing to do. And this is the thing that you need more than anything else, which is something to say when you get on stage.

“I talk to comedians about writing and they go, ‘ehh, I don’t really worry about it,'” he continued. “And I say, ‘Really? You don’t worry about it? I don’t know what else you have to worry about.'”

“I saw guys go on TV, and they would do a shot on ‘The Tonight Show,’ and then they’d come back and they’d do a set that was half as good. And then the third time would be shake-y, and then they were gone,” he said. “I realized that it’s fun, it’s all fun ,but it’s actually a very severe environment to survive … [but] if you can go on TV and kill every time, you’ll survive.”

Also Read: Here Are Some Lost 'Seinfeld' Storylines That Almost Happened, According to Writers

One of Seinfeld’s friends and fans in attendance at Tuesday’s premiere was Jay Leno, Carson’s successor at “The Tonight Show.” Leno had the first question when the Q&A was opened up to the audience, except Leno’s only desire was to praise Seinfeld and the “timeless” special he had just seen.

“The thing I loved about this was it’s just pure comedy,” he said. “I just want to say, every young comedian should watch this special and learn from it.”