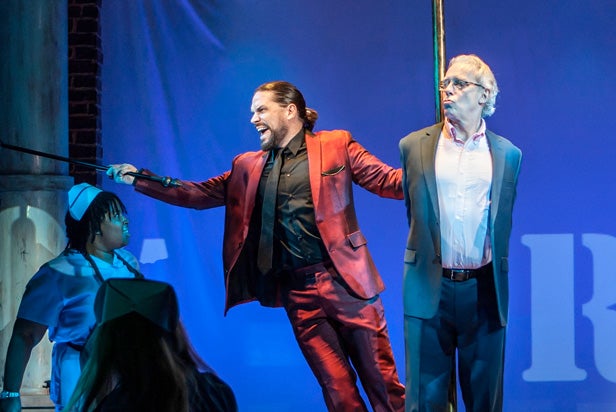 “Jerry Springer – The Opera” finally comes to New York City in a fully staged production. Under the auspices of The New Group, Richard Thomas and Stewart Lee’s much-lauded show opened Thursday at Off Broadway’s Pershing Square Signature Center. Its debut here comes a full decade after a concert version of “Jerry Springer” briefly played Carnegie Hall and 15 years after the musical’s world premiere in London, where it went on to win the Olivier Award for best new musical in 2003.

Why the long wait? Indeed, the show requires a big cast. But with 17 actors on stage it’s not one of the biggest productions ever to reach the boards here. Indeed, the lyrics are replete with f-bombs and other cuss words. But every one of those words has been heard on stage in the previous century. Indeed, one adult male character in “Jerry Springer” dons diapers and threaten to poop in public, much to his girlfriend’s disgust. But that episode would only qualify as a first if you were one of the unfortunate few who didn’t see Wayne County perform back in the 1970s in the East Village.

No, the dirty secret behind the delayed arrival of “Jerry Springer – The Opera” is that the show’s not very good. Thomas’s music is uninspired pastiche, and his and Lee’s lyrics derive most of their humor from having operatically trained voices sing four-letter words. This inferior score is draped over a nearly inept book, also by Thomas and Lee, which attempts to retool itself during intermission only to skid into total confusion.

Thomas had much success as the librettist for a similarly themed show, “Anna Nicole,” an opera that had the distinct advantage of a score by Mark-Anthony Turnage and not Thomas. Anna Nicole Smith and Jerry Springer. Oh, how superior these Brits must feel to us rednecks on the other side of the ocean.

Speaking of superiority complexes, “Jerry Springer” never makes us theatergoers feel complicit with the Springer TV audience. The talk-show host’s low-life, stupid, morbidly obese guests are there on stage simply to be mocked.

But even as an act of voyeurism, “Jerry Springer – The Opera” is not very attention-grabbing. The first act features three vignettes, each involving a romantically fraught couple. A shlubby fiance (Luke Grooms) is cheating on his shlubby girlfriend (Florrie Bagel) by banging her shlubby best friend (Beth Kirkpatrick being especially low in a deliciously funny way), as well as an wafer-thin transsexual (Sean Patrick Doyle).

Then we’re treated to the diaper man (the vocally arresting Justin Keyes) and his half-normal girlfriend (Elizabeth Loyacano). The third story is downright mundane: A woman (Tiffany Mann, also vocally great) has ambitions to be a pole dancer despite objections from her husband (Nathaniel Hackmann). The third story doesn’t up the shock ante, but instead features the show’s only hit tune, “I Just Wanna Dance,” a disco anthem that tells you much about the lackluster nature of the many, many other songs. (“I Just Wanna Dance” is amplified when you leave the theater so that you literally go out having to hum it.)

What doesn’t tie everything together is the character of Jerry Springer. Terrence Mann turns the talk-show host into a benign eye of the storm whenever one of his guests spills his or her over-ample guts and he quietly asks, “So, what’s on your mind?” But the story quickly unravels when Thomas and Lee attempt to make Springer a tragic character, bemoaning his fall from grace (“I was campaign advisor to Bobby Kennedy”) and blaming his current low-TV status on the Warm-Up Man (Will Swenson working hard to little effect) who whips up the booboisie audience into a blood-thirsty mob.

The second act of “Jerry Springer” takes place in literal Hell, and the Warm-Up Man is now the Devil (Swenson continuing to overextend himself) who cons Springer into hosting a show where the guests are Jesus Christ (Keyes, trading his diaper for a toga), God the Father (Grooms), the Virgin Mary (Jennifer Allen), and Adam (Hackmann)and Eve (Mann), who does make the point that taking one bite of an apple is not such an awfully big deal.

Someone also delivers a funny line about the C-word, saying, “You don’t have to have one to be one.” Otherwise, it’s a long mess of a second act.

John Rando directs, and his idea of hell is to bring on the dry-ice fog, red lights and projections of flames. In comparison, the Met Opera’s current, dowdy production of “Don Giovanni” looks positively cutting edge in its rendering of Mozart’s inferno.