Jesse Plemons will star opposite Elizabeth Olsen in HBO Max’s “Love and Death.”

The series is based on the book “Evidence of Love: A True Story of Passion and Death in the Suburbs” and a collection of articles from “Texas Monthly.” Here is the logline: “Two church going couples, enjoying small town family life in Texas, until somebody picks up an axe.”

Olsen will play infamous ax murderer Candy Montgomery. Plemons will play Allan Gore, whose affair with Montgomery led to the murder of her friend (and Allan’s wife) Betty Gore.

Written by David E. Kelley and directed by Lesli Linka Glatter, “Love and Death” is the second streaming limited series project to revolve around Montgomery, who killed her church-going friend with an ax in the 1980s. Elisabeth Moss is playing Candy in a Hulu series from Robin Veith with Nick Antosca. 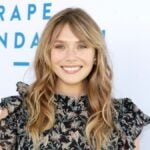 He most recently starred alongside Lakeith Stanfield and Daniel Kaluuya in “Judas and the Black Messiah.”