Jesse Tyler Ferguson has two big finales coming up just a few days apart from each other. First up, the season finale of his first TV hosting gig, “Extreme Makeover: Home Edition,” airs Sunday on HGTV. Then next Wednesday, “Modern Family” will conclude it’s 11-season run with a two-hour farewell on ABC.

That would be a big week for any actor under even normal circumstances, but in the current era of social distancing and self-isolation, everything has taken on a different feeling.

“I think it’s going to be really emotional to watch it on television next week,” Ferguson said in an interview with TheWrap. “Now that I don’t have anywhere to go, I’ve been able to sit down and watch the show in real-time — which I haven’t been able to do before — so I think it’ll be interesting to watch it while all of our fans are watching it for the first time.”

The huge success of “Modern Family” launched Ferguson’s career to a new level, opening doors to a breadth of new opportunities. But now that the show that defined his life for the last decade is preparing for its final bow, the actor is looking ahead to new experiences — more home makeovers included.

“I never saw myself as a television host, but the message of ‘Extreme Makeover’ is so important to me and it feels so right,” Ferguson said. “First and foremost, I will always be an actor …[but] I hope to be someone who gives back the rest of my life, as well. And to have a platform like this show to do that in a really big, extreme way has been really meaningful to me.”

“So I would love do keep doing it for as long as people want to watch,” he said. 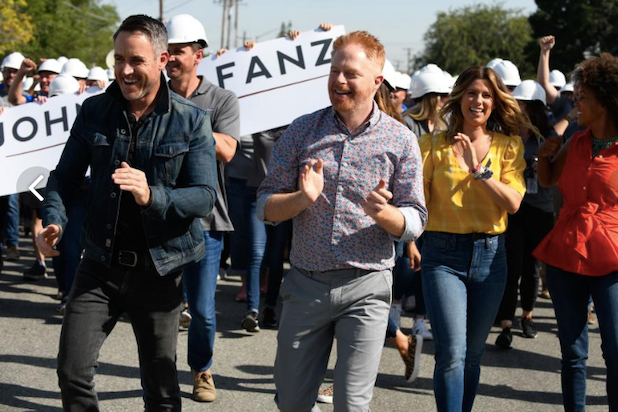 Now that the first season of “Extreme Makeover” is coming to an end, what are some of your biggest takeaways when you look back on the experience?

This was a really different thing for me to do. I’m an actor, not a television host, so it was really my first time stepping into a role like that. And it was also the first time that I’d stepped into a show that I’d been a fan of. It was a very surreal experience to be taking over the job that Ty Pennington did so brilliantly for the, what, nine, 10 seasons that the show had been on the air. And I was also filming it at the exact same time that I was starting the last season of “Modern Family.” It was sort of a miracle that we worked it out schedule-wise. It was a really exhausting few months, because I would basically be with “Extreme Makeover” every day I wasn’t doing “Modern Family.” So it was the busiest I’ve ever been and the most out-of-my-comfort-zone that I’ve ever been. But to balance all that, it was doing a show that was bringing so much hope and restoring things that families needed. It did so much good for the 10 families that we got to encounter, and it just made all that work worth it, really. It was a really grueling two months, but every time we revealed a home to a family, it just made it all worth it.

Did you find that you had a favorite part of the process?

Nothing will ever beat saying “Move that bus” and seeing the family’s reaction to seeing their new home for the first time, and I had a front-row seat to that. So that really is the best. But also, I’m realizing that — you know, I’ve been on television on a pretty popular TV show for the past 11 years. But before that I was pretty anonymous. I would meet strangers and talk to people. I lived in New York and loved riding the subway. I realized that I missed getting to know new people. I think something that happens when you’re on a show and you become quote-unquote famous, you kind of put up a guard around people sometimes. It’s harder to let people in because sometimes you’re wondering what their reason is for wanting to get to know you. Like, is it because they’re a fan or do they want something from you? I missed that piece of me that was just being myself around strangers. And this show gave that back to me. I was able to meet people and really get to know them and find out what was going on in their families and what their struggles are. I got to sit down and talk to these people for hours. I became really close with all of these families, and I really treasure the moments that I had with them. Now I follow them all on social media and I keep in touch and it’s like they’ve become friends of mine. It’s a reminder to me that I don’t always have to worry about all the things that I’ve been worried about for the past 11 years. The majority of people are good people. Obviously, there are some bad apples in the bunch, but I think for the most part, humanity really is good.

What can you tell us about this Sunday’s finale?

[The homeowner,] Deon Joseph, he makes hygiene kits for the homeless. And a lot of these families that we’re encountering, they put themselves and their homes — and sometimes even their family members — second to their community, which is a really beautiful thing. They’d rather spend their money, for example, making hygiene kits for the homeless rather than repairing the faulty wiring in their house, because they want to give back before giving to themselves or taking the things they need. And that’s what I love about “Extreme Makeover,” we demand that they accept help. They do such a great job helping others, but they sometimes forget that they can accept help. So we come in and sort of give them no choice. We’re giving you a new home. You can continue to do what you do so beautifully, but also live in a place that’s safe, live in a place that’s beautiful for you and hopefully enables you to continue doing what you do for others. So for the Joseph family, we renovated their home and gave them a space where they can continue to make these hygiene kits for the community and bring in people when they need help in a way where it’s comfortable for everyone, really keeping the family in mind first and foremost.

I think for a lot of people that sense of community feels really unfamiliar in this day and age. Were you surprised by how many people were willing to turn out for their neighbors?

Yeah, absolutely. It reminds me that it’s free to give back many times, especially when you’re volunteering like that. It costs you nothing and it can be so impactful. In this day and age when we’re all so, you know, wrapped up in social media and have our heads in our phones, it’s really nice to look up and connect with mankind again. And this show, for me, does that. There are these people who come out and volunteer their time and help build a home. Sometimes they don’t even know the family; they might just be neighbors who’ve heard about the story and they want to give back because they’ve been inspired by what these families do. So it really is the best of mankind coming together and it is really powerful. It’s something that you can easily forget about, and I think for a lot of us it’s a really foreign thing. I hope that for people who watch the show, it inspires them. Not necessarily to build a stranger a house, but to be different, to be a little more generous with one another. That’s absolutely free and it’s so easy to do. 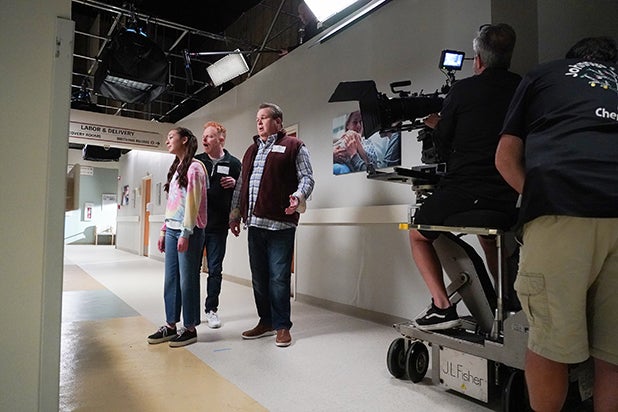 You have these two finales coming up — “Extreme Makeover” and “Modern Family” — in a time when you can’t really celebrate them in the same way you might’ve otherwise. How are you feeling about that?

It’s so surreal to have these two shows ending literally days apart from one another. “Extreme Makeover,” I’ve done 10 episodes of, and “Modern Family,” I’ve done 250 episodes over 11 years. So there’s a lot of very different backstory and a lot of very different feelings attached to both of those. But I’m so grateful that we were able to finish “Modern Family” the way we wanted to before all of this happened. My heart hurts for shows that aren’t able to do that. It’s also something for the fans. I would’ve been devastated if we wouldn’t have been able to finish “Modern Family” and it just ended sort of ambiguously. We had a really nice last few weeks together as a cast and we had a really wonderful wrap party, and I’m just really grateful that we got to have that closure. I think it’s going to be really emotional to watch it on television next week. Now that I don’t have anywhere to go, I’ve been able to sit down and watch the show in real-time, which I haven’t been able to do before. So I think it’ll be interesting to watch it while all of our fans are watching it for the first time.

What has that interaction with fans been like so far, having them watch these episodes that you filmed so many months ago?

I know how it ends, I know what’s coming up, but it’s really lovely to watch people see it for the first time. A lot of people reach out on social media just saying how much they’re going to miss the show, how much they’ve enjoyed watching. And a lot of people have grown up watching the show. There are children who are 16, 17, 18 years old now who say they grew up watching the show. It’s like “Friends” was for me. And that’s crazy for me to think about. I’ve been in rooms with Jennifer Aniston and Matt LeBlanc, and Courteney Cox did an episode of “Modern Family,” and I could not believe that I was sitting across of Monica Geller. And to think that our show has that same impact on people that “Friends” or “Will & Grace” or “The Cosby Show” had for me, that’s really pretty mind-boggling.

I never saw myself as a television host, but the message of “Extreme Makeover” is so important to me and it feels so right. It just feels very on-brand, for lack of a better word. I would absolutely love to continue to help families in this way. You know, it was a really profound experience. It was probably the hardest job I’ve ever had to do, because, you know, we’re building a house and I’m in there getting my hands dirty. The conditions were really complicated and sometimes it was really hot. It was challenging, but it was all worth it in the long run. First and foremost, I will always be an actor. I want to be seen as someone who creates characters, that’s what brings me the most joy. I love being on stage and I loved being part of “Modern Family” for 11 years, so that will always take priority for me. But I do hope to be a humanitarian. I hope to be someone who gives back the rest of my life, as well. And to have a platform like this show to do that in a really big, extreme way has been really meaningful to me. So I would love do keep doing it for as long as people want to watch. 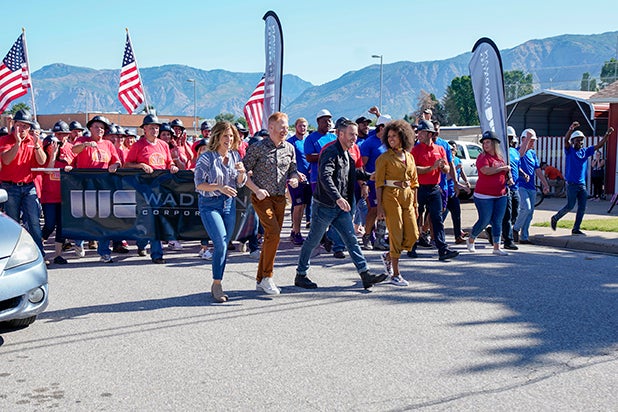