The Honest Company specializes in eco-friendly beauty, baby and home products. Alba founded the brand in 2011 with the mission of democratizing clean living. A decade later, she’s taking home an honest sum of her own.

According to regulatory filings, Alba holds more than 5.6 million shares of the company, including 1.4 million stock options that will become exercisable this month. Those shares are now worth nearly $130 million at Wednesday’s closing price.

Alba has her own name and face to thank for those big bucks. In its IPO prospectus, The Honest Company told potential investors that, “We believe that the success of our brand depends in part on our ongoing affiliation with Jessica Alba. The loss of the services of Ms. Alba, or the loss of our ability to use Ms. Alba’s likeness, could have an adverse effect on our business, financial condition, results of operations and prospects.”

The company also counted the actress’s supersized social media following (39 million followers overall) as a major asset to its reach and influence, “She has an innate and invaluable ability to resonate and engage with the consumer, driving trends across demographics and generations,” the prospectus says.

At 40, Alba is the youngest Latina to ever take a company public on the stock exchange. She expressed her optimism for the future of the brand in an interview, “This is an incredible jump off into building a company that I hope will be around for 100-plus years.” 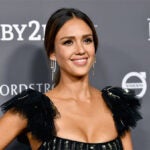