This story about Jessica Biel first appeared in The Limited Series/Movies issue of TheWrap’s awards magazine.

The year was 1980 and Wylie, Texas, was a small town of just over 3,000 residents when the grisly ax murder of local housewife Betty Gore rocked the community. And the scandal was only beginning, as subsequent days revealed that the primary suspect was her friend Candy Montgomery.

Hulu’s limited series “Candy” adapts the true crime tale with Jessica Biel starring as the equal parts effervescent and enigmatic woman who lends her name to the title. Co-created by Robin Veith and Nick Antosca, “Candy” unfolds its narrative in zigzags, all the better to keep its audience unsure of how they feel about the protagonist and her uncanny ability to get what she wants.

What first drew you to “Candy”?

Originally, it was the writing. I read the first couple of episodes and then started looking into this story, which I had never heard of before. At that point, I understood where we were going and what had happened, but the initial draw was really this elegant, nonlinear storytelling with these oddly demented, quirky, funny tones. Co-creators and showrunners Robin Veith and Nick Antosca have this ability to find a beautiful balance between those things.

And then, of course, the intrigue of, “Wow, this story is so unbelievable. This woman is so curious and unusual. How did this happen? How did this normal person do this heinous thing? And get away with it?”

To Robin, my first question was, “Well, who’s gonna play Betty?” And I’m a huge Melanie Lynskey fan, so to me it was like this whole amazing package was all coming together, all of these elements already in place. 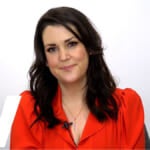 What changes when you’re approaching a role that’s based on a real person?

I think the main difference is the care and sensitivity I want to take when stepping into the story of someone who actually existed in the world and who is still existing. This was a story and a time in a community’s life and, in particular, two families’ lives, that changed everything. It’s sensitive. And we want to be careful that we’re not making a farce out of somebody’s life or we’re not being disrespectful in any way. That we’re not just creating caricatures of somebody’s real-life, horrific experience.

As an actress, what challenges did you face trying to get into the head of this person who, arguably, got away with murder?

It was a major challenge. I’ve never been in an experience like that before.

There’s a line in the series when Raúl Esparza, who plays my lawyer, Don Crowder, says that there’s a room of experience in which Candy lives that we, the rest of us, will never know. And that’s always stuck out to me. Because as much as I can, I put myself into a headspace where I can understand being pushed to the brink, I can understand the deep amount of rage that I have felt in my life from time to time and repressing my own feelings the way that she did. I can connect with her in that way.

And I think a lot of women and men can connect with those feelings of shame about choices you’ve made in your life and guilt about not doing things you wanted to do. Guilt over, “Well, I should be happy, but for some reason, I just don’t feel satisfied.”

You’ve said previously that you enjoy true-crime podcasts. Considering how popular the genre is, do you have any insight into why it appeals to so many people?

For me, true crime focuses on this human experience that we’re all living in and on people who are put into these extraordinary moments and have to make a split-second decision. And often, it’s a very controversial one. When I’m listening to a podcast, I’m constantly fascinated by humans and the choices we make.

You serve as an executive producer on Candy, which is a role you’ve taken on several times in recent years. What specifically appeals to you about that process?

I really enjoy the development of material. I enjoy working with the writers and having a voice in the characters and their journeys. I think I can come at a script or a story or a character arc with an actor’s viewpoint, which is not better or worse, it’s just different, and it’s so nice to be able to collaborate in that way.

I feel like, especially if I’m playing a character and able to develop with the writers and talk through all of these moments, they’re really able to write to my strengths and my weaknesses. Obviously, the character is what the character is, but when you have that person in mind, and you’re working hand-in-hand, the actor and writer together, I think it’s a recipe for success.