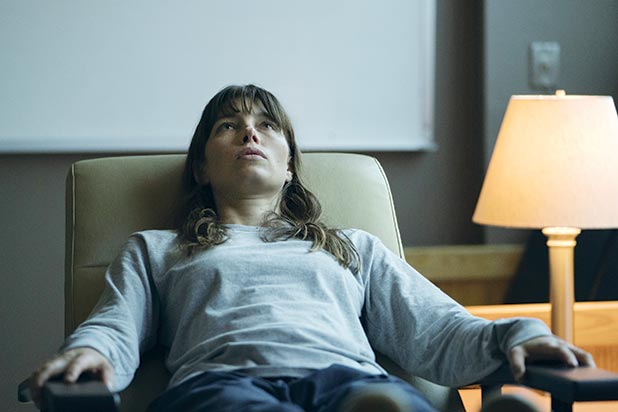 This story about Jessica Biel first appeared in the Down to the Wire issue of TheWrap’s Emmy magazine.

After she finished filming her violent and trauma-laden limited series “The Sinner,” Jessica Biel remembered with a laugh, “I looked at my partner Michelle and said, ‘We’re only doing animation from here on out.'”

She said this on a phone call from the Bahamas, soaking up the sun after shipping off her husband, Justin Timberlake, and son, Silas, in a golf cart.

But the USA Networks project that has landed Biel in the Emmy race was no day at the beach. “It was super intense and a lot of heavy lifting, but there’s a real joy in the torturous aspect of our jobs,” said Biel, who also produced the series. “At the end of the day, you’ve had a great scene and you look at your partners and it’s so satisfying. But my poor crew was tired of seeing bodily fluids coming out of my face.”

Also Read: 'The Sinner' Season 2 Trailer: Why Did This 11-Year-Old Kill His Parents? (Video)

Biel plays Cora, a mousy and nervous mom of toddler Laine and wife of a blue-collar sweetheart named Mason (Christopher Abbott). Their quiet lives are upended when an afternoon by the lake ends in murder, as Cora is mysteriously triggered by a pop song to brutally stab a nearby man with a paring knife.

As Cora is arrested and processed, detective Harry Ambrose (Bill Pullman) races to uncover the bizarre circumstances that would lead her to such an act — and a decade of secrets that led her to the crime.

Aside from appreciating the source material (“The Sinner” is based on a novel by Petra Hammesfahr), Biel found the themes of the show resonating with the #MeToo and Time’s Up movements.

“This is a moment in time where everyone is being really truthful, and talking about things that are hard to say,” she said. “We’re talking about traumas and abuses, and everyone is laying it out, so this gave us a bit of lightning in a bottle. Somehow, I think it is coinciding with the palette that we’re living with right now in terms of unrest and confusion.”

“The Sinner” is continuing as an anthology, covering a brand new case and revisiting more sins of the past. Biel will remain as a producer, but don’t count out Cora.

“I’m not coming back this year,” she said coyly. “But we’re continuing the important question at the center of these crimes: ‘Why?’ not ‘How?'”