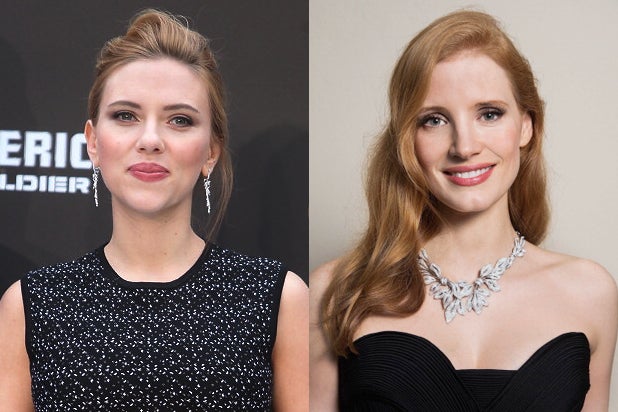 Jessica Chastain, who played secret agents in “Zero Dark Thirty” and “The Debt,” is going to bat for a fellow ass-kicking leading lady.

Speaking of the dearth of great roles for women in Hollywood, the actress told TheWrap on Wednesday that she would love to see “Avengers” star Scarlett Johansson get her own super-vehicle.

“Where is the Scarlett Johansson superhero movie? I don’t understand it, why is it taking so long for this?” Chastain asked TheWrap, rhetorically and with no small degree of animation. “This woman clearly shows that people want to go see her in the movies. ‘Lucy,’ didn’t it beat ‘Hercules’ by a lot opening weekend, when it was made for a lot less? She shows that she kicks ass, she’s a great actress. ‘Under the Skin’ is an incredible film, and why are we still waiting for a go-ahead on a superhero movie starring Scarlett Johansson?

“To me, it’s a no-brainer,” she added. “You want to make money, put Scarlett Johansson in a superhero movie!”

Her math is correct: “Lucy,” the Luc Besson-directed sci-fi action flick that stars Johansson as a college student who gets superpowers as her brain expands, has made $217 million around the world on just a $40 million budget. It was the number one film in America when it opened in July, taking in $43 million in its first weekend.

Fans have clamored for Johansson, who stars in the Marvel movies as super spy Black Widow, to get her own film as the Russian heroine. But thus far, the studio has shown little inclination to make it happen.

“I think it comes down to timing, which is what I’ve sort of always said, and it comes down to us being able to tell the right story,” Marvel Studios chief Kevin Feige told Comic Book Resources earlier this summer. “I hope we do it sooner rather than later. But we find ourselves in the very strange position of managing more franchises than most people have — which is a very, very good thing and we don’t take for granted, but is a challenging thing. You may notice from those release dates, we have three for 2017. And that’s because just the timing worked on what was sort of gearing up. But it does mean you have to put one franchise on hold for three or four years in order to introduce a new one? I don’t know. Those are the kinds of chess matches we’re playing right now.”

Meanwhile, Chastain stars in the upcoming drama “The Disappearance of Eleanor Rigby,” which has three different versions: One (subtitled “Her”) from the perspective of her title character, one (“Him”) from the perspective of James McAvoy (her on-screen husband), and one (“Them”) that combines the two. All three will be released in theaters at some point, with the two character-skewing versions out on Oct. 10th in limited release.

In fact, Chastain is responsible for the fact that there is even more than one version of the film; years back, she told writer-director Ned Benson that she liked the script, but thought the character of Eleanor Rigby needed more back story and detail. That led to him writing the “Her” version, which along with “Him” was screened at Toronto before a “Them” cut was made for wide release in September.

“It’s a fact, the majority of films in Hollywood are from the male perspective,” she said. “And the female characters, very rarely do they get to speak to another female character in a movie, and when they do it’s usually about a guy, not anything else. So they’re very male-centric, Hollywood films, in general. So I think it’s incredible that Ned Benson, when I said I’d love to know where she goes, says okay I’m going to write another film from the female perspective.”