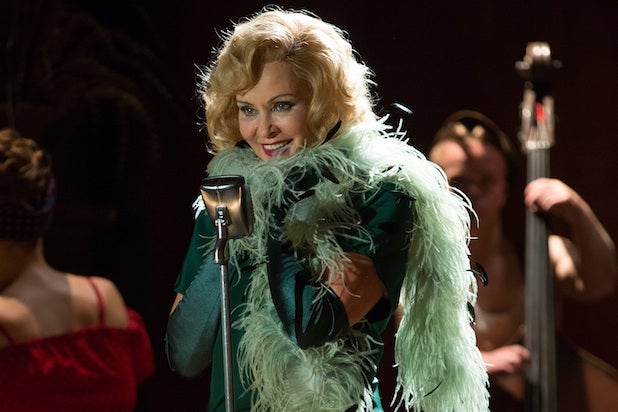 As Jessica Lange‘s run on FX’s “American Horror Story” comes to an end after four seasons, two Emmys, three Emmy nominations, a SAG Award and a Golden Globe, show creator Ryan Murphy has many reasons to thank the leading lady who gave his horror anthology both weight and class. And the feeling, clearly, is mutual.

“I feel like Ryan, who I think is a genius, gave me four of the best characters that I’ve ever played over my entire career,” Lange told TheWrap. “There’s always things about the work that you don’t agree with or whatever, but I have to say it was thrilling.”

“There was something in the way that we shot — the chaos, the velocity — that opened up a whole new way for me to work.”

Riding high on the success of Fox’s “Glee” in 2011, Murphy had wanted to explore the horror genre on television. His first step was securing an icon to anchor the series, one who would at first deceive the public regarding the format of a show that would change themes and characters with each season but retain most of its repertory players. And Lange made a bet that Murphy’s experiment was a golden opportunity to do brilliant character studies and introduce herself to new generations with the artful camp Murphy is famous for.

That camp took Lange to dizzying new places. Across four years of “Horror Story,” she played a homicidal woman responsible for raising the Antichrist in the first season, subtitled “Murder House;” a deranged nun who administered corporal punishment and electroshock therapy to the criminally insane in Season 2, “Asylum;” a witch selling her soul to an ancient voodoo deity who demanded primo cocaine to sweeten the deal in “Coven;” and, in this past season, “Freak House,” a Weimar Republic dominatrix, Elsa, whose legs were amputated in a snuff film before she escaped from Germany and came to the U.S. to run a Florida freak show.

“You could never be tentative,” she said. “You just had to be brave, you had to trust your instincts and you just had to jump in the deep end from the very beginning. It came at exactly the right time in my work, something that I really needed — to mix it all up.”

The workload hit a sweet spot for Lange, who, despite the occasional 17-hour day, felt the limited series format gave her just enough time to relish a character before moving on. “You don’t have to tell the whole story in an hour and twenty minutes, so you’ve got certain hours of unrolling, unspooling,” she said.

“It was a perfect storm, in a way, because I got to play these fabulous characters for 13 hours and then walk away from it, which is very different from a drama series. There you have to sustain this character year after year. That doesn’t interest me.”

But while her four “AHS” characters were dramatically different, the veteran actress found common ground. “There was a thread through all four of those characters, which is a kind of desperation, a profound disappointment in life,” Lange said. “As on-edge or neurasthenic as they appear to be, they have a spine of steel. It’s exactly the kind of complexity in a character that I love, that it appears to be one thing and it’s something else.”

It’s not surprising that the Oscar-winning actress could handle complexity, but don’t let it be said that “American Horror Story” didn’t throw her curveballs — for instance, when the godfather of “Glee” asked Lange to sing.

“I got to sing David Bowie!” she said of one of several “Freak Show” musical numbers, which included Bowie’s “Life on Mars” and Lana Del Rey’s “Gods & Monsters.” “When am I ever going to get that opportunity? It’s crazy.”

It also harkened back to a scene in “Aslyum” in which she performed Shirley Ellis’ quirky classic “The Name Game” with co-stars Sarah Paulson and Evan Peters. The moment generated rampant Twitter conversation, a medium on which the series is consistently a top trend — not that Lange is paying much attention.

“I am so not into social media,” she said with a laugh. “The tweeting, the Facebook, the pictures of one’s self [a.k.a. selfies]. I’m firmly opposed to all of it.”

But she’s not, she admits, firmly opposed to a return to the “American Horror Story” universe, even as a fifth, Lange-less season arrives this fall with Lady Gaga, Matt Bomer, Angela Bassett and Kathy Bates.

“Who knows?” she said. “If Ryan came to me and said, ‘Would you want to do a small character for a couple episodes?’ I would absolutely say yes if I liked it. This was a great collaboration, so I would love to keep working with him.”