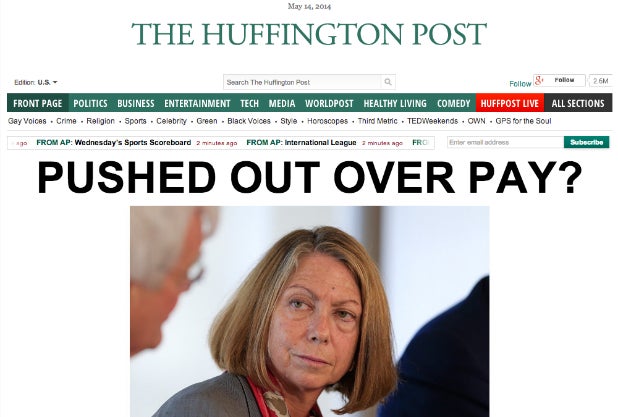 The revelation that Jill Abramson may have been fired as executive editor of The New York Times after confronting top brass over being paid less than her predecessor Bill Keller has led to a Twitter uproar.

Media writers including journalism professor Emily Bell, influential women bloggers like Rachel Sklar, non-profit organizations and casual observers alike balked at the idea that a woman might have lost her job for bringing up an issue of equal pay. One blogger dryly referred to Abramson being too “bossy,” a reference to Sheryl Sandberg’s new “Ban Bossy” campaign.

And while The New York Times denied that Abramson received unequal pay, a rising chorus of media reporters – including NPR’s David Folkenflik – confirmed the initial report by The New Yorker’s Ken Auletta. Auletta wrote that Abramson challenged publisher Arthur Sulzberger over her compensation being “considerably less” than her predecessor.

Folkenflik tweeted “can now report that I have independently confirmed that Abramson did indeed challenge corporate brass over what she saw as unequal pay.” The issue is clearly still sensitive, and more so considering the company in question is a left-leaning newspaper.

“Pushy” and “brusque”: terms that have never been used to describe a man. http://t.co/cTNT9XLHEF #JillAbramson — Elizabeth Plank (@feministabulous) May 15, 2014

Guys, you see so many women who instantly believe that Jill Abramson pay story because we could tell you near-identical stories ourselves.

Sooo according to @NYT Abramson is told she has an unfortunate management style, gets help with it, is fired anyway http://t.co/kjOPSDsBal

I wonder if the Times management was paying Jill Abramson 77 cents for every dollar it paid her male predecessors. — jimgeraghty (@jimgeraghty) May 14, 2014

The firing of Jill Abramson and the hiring of Dean Baquet is going to cause a rift in the white feminism space time continuum. — Imani ABL (@AngryBlackLady) May 14, 2014

jill abramson was fired after she asked to be paid as much as her male predecessor. jaw. on. floor. http://t.co/LxQXkXZUiV

What happened to Jill Abramson shows everything that sucks about being a woman leader http://t.co/Lg2xWsjG4b

Whatever the reasons behind today’s @nytimes changes, newsrooms have a ways to go with regards to women, not least of which NYT.