“It’s as if much of the Republic Party is trapped in a Jimmy Buffett tune,” Acosta said before launching into the recitation, completely straight-faced: “Wasting away again in Mar-a-Lagoville, looking for that next election to assault. Some people claim that there is an orange man to blame, but I know, it’s my own damn fault.”

The “Mar-a-Lagoville” gag came toward the end of a six-minute segment in which Acosta mocked Trump supporters for their campaign to overturn the 2020 election and the false claim that Trump will somehow reclaim the White House by August. He also took aim at Trump supporters like former Vice President Mike Pence and the notorious MyPillow CEO Mike Lindell. 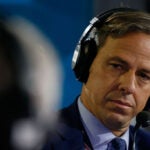 “You are not well, sir,” Acosta said, addressing Trump directly. “You need to get over this. Same goes for the GOP.”

Acosta concluded the segment by warning of a different, “slow-motion coup” being conducted by the Republican party, citing efforts to restrict voting rights across the country and the “sham” audit of the 2020 election in Arizona.

“More than 100 scholars said it best this week: Our democracy is fundamentally at stake. History will judge what we do at this moment,” Acosta said. “Please, no more elections to assault. If it happens again, it will be our own damn fault.”