Acosta was reflecting on the Memorial Day weekend, saying American democracy is at risk because of Trump’s “big lie” that a massive conspiracy stole the 2020 presidential election from him, and that lie perpetuates because of congressional Republicans.

“The man who unleashed this era of unhinged thinking, former President Trump, is now being shielded by his part,” Acosta said, referring to the Senate GOP’s block of an independent commission that would have investigated the Jan. 6 insurrection at the Capitol and Trump’s role in stoking it. “Some of the GOP sound as if the rebellion hasn’t ended.” 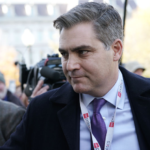 Footage of Rep. Gaetz at an America First rally showed the Florida congressman urging his audience to “use” their 2nd Amendment rights.

“The 2nd Amendment is about maintaining within the citizenry the ability to maintain an armed rebellion against the government if that becomes necessary,” he told the crowd. “I hope he never does.”

Showing a clip of Taylor Greene making that comparison, Acosta called that “shameful.”

Watch the video clip above. 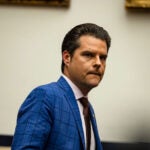