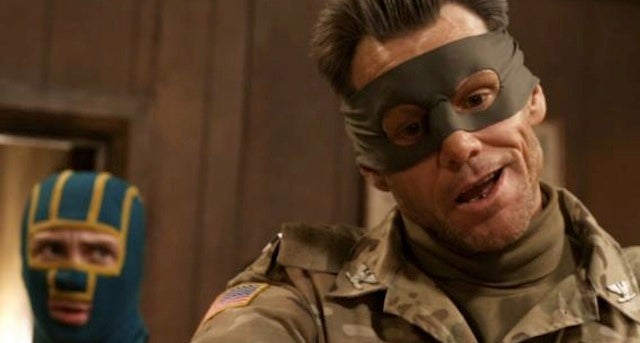 Jim Carrey is having second thoughts about his ultraviolent work in "Kick-Ass 2" in light of last year's Newtown shootings.

Carrey, a gun-control advocate, is reconsidering his role after the mass killing, in which a gunman killed his mother, six other women and 20 children, as well as himself.

"I did Kickass a month b4 Sandy Hook and now in all good conscience I cannot support that level of violence," Carrey announced on Twitter on Sunday.

"I am not ashamed of it but recent events have caused a change in my heart," he added.

Carrey plays Colonel Stars and Stripes in the August release. In a trailer for the film, his character is seen ordering his dog to bite a man's genitals.

Representatives for Universal Pictures, which is distributing the film, and for Carrey did not immediately respond to requests for comment and it was not clear if the actor will promote the film.

Mark Millar, the writer of the "Kick-Ass" comic books, did respond to Carrey's statements on his personal website. He praised the actor, but expressing bewilderment about his grievances.

"Jim is a passionate advocate of gun-control and I respect both his politics and his opinion, but I'm baffled by this sudden announcement as nothing seen in this picture wasn't in the screenplay eighteen months ago," Millar wrote. "Yes, the body count is very high, but a movie called 'Kick-Ass 2' really has to do what it says on the tin. A sequel to the picture that gave us HIT-GIRL was always going to have some blood on the floor and this should have been no shock to a guy who enjoyed the first movie so much."

Millar went on to write that he did not believe there was a correlation between the onscreen carnage and mass shootings.

"Ultimately, this is his decision, but I've never quite bought the notion that violence in fiction leads to violence in real life any more than Harry Potter casting a spell creates more Boy Wizards in real life," he wrote. "Our job as storytellers is to entertain, and our toolbox can't be sabotaged by curtailing the use of guns in an action movie."