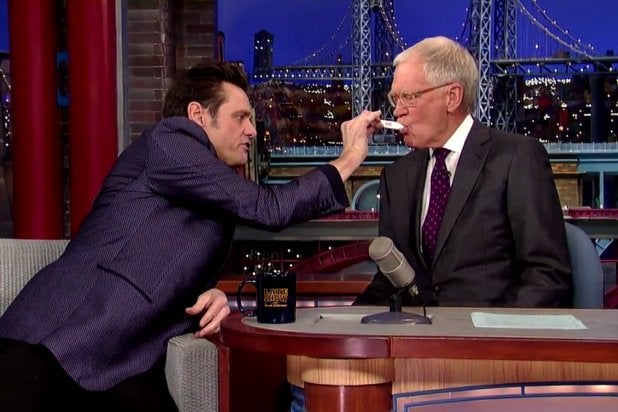 With Ebola all over the news, and a case reported in New York City, Jim Carrey decided he could never be too careful. So during his “Late Show” visit Wednesday, he figured he should probably test David Letterman for the virus to make sure it was safe to be in such close proximity.

While Letterman held a thermometer in his mouth to gauge his temperature, Carrey moved on to the questionnaire portion of the test. Letterman was quickly able to say that he’d not recently traveled abroad, but the second question tripped him up a bit.

“Have you ever kissed a monkey or licked an airport toilet seat?” Carrey asked him. With the thermometer still in his mouth, Letterman had to admit he couldn’t say no to that question.

But the real surprise came when Carrey retrieved the thermometer. “55 degrees, just like the studio,” he said.

When asked if he had any concerns about contracting diseases during promotional tours for his films, Carrey casually responded, “Once you’ve done a couple of press tours, you welcome death.”

Jim Carrey can be seen alongside Jeff Daniels in the Farrelly Brothers sequel “Dumb and Dumber To,” in theaters Nov. 14. “Late Show with David Letterman” airs weeknights at 11:35 p.m. ET on CBS.