Jim Carrey has weighed in on the Oscar slap heard ‘round the world.

While on “CBS Mornings” (ostensibly to promote this week’s “Sonic the Hedgehog 2”), host Gayle King asked him about what happened at the Oscars, when Will Smith assaulted Chris Rock on stage after Rock made a joke about Smith’s wife Jada Pinkett-Smith’s hair. (She has alopecia.)

You can watch the video at the top of this post.

“I was sickened. I was sickened by the standing ovation. I felt like Hollywood is spineless — en masse,” Carrey said. “This is a really clear indication that we’re not the cool kids anymore.” 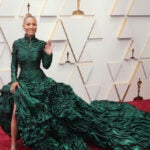 Also Read:
Jada Pinkett Smith Says ‘This Is a Season for Healing’ After Will Smith Apologizes to Chris Rock

“He doesn’t want the hassle,” Carrey said. “I would have announced this morning that I was suing Will for $200 million because that video is going to be there forever, it’s going to be ubiquitous.” Carrey, who started as a stand-up comedian before transitioning to one of the biggest movie stars of the 1990s, later said: “You do not have the right to walk up on stage and smack somebody in the face because they said words.”

Carrey, who has never received an Academy Award nomination, acknowledged how hard the campaign to get to Oscar night really is. And was disappointed that Smith’s behavior overshadowed that for so many talented actors and craftspeople. “It was not a good moment,” Carrey said. “It cast a pall over everybody’s shining moment.”