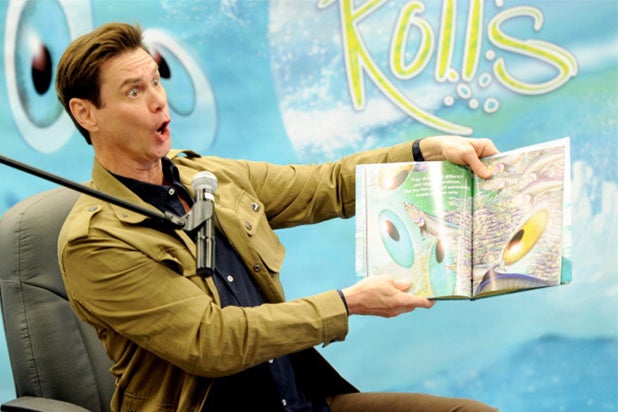 Making his authorial debut, Carrey wrote and recently released a children’s book “How Roland Rolls,” the story of a wave who is afraid to crash on the beach out of a fear of dying.

Beyond the color-drenched pages, Roland’s surprise ending delivers an existential suggestion about spirituality and the afterlife that runs… deep. It’s not “Goodnight Moon.”

With about a month left of shooting “Dumb and Dumber To” in Georgia, Carrey returned to Los Angeles to read for a packed floor of kids at The Grove’s Barnes and Nobles on Saturday afternoon.

As the line for autographed copies snaked throughout three levels of the store, and tons of kids sat on the floor waiting for story time, TheWrap spent some time with Carrey in a back stock room discussing how winning awards as an author is different from film, his enterprising use of Skype, and the “insanity” of the “Dumb and Dumber To” shoot.

TheWrap: You’ve said that your inspiration for writing “How Roland Rolls” is family. Can you explain that?
Jim Carrey: There’s little things you leave for your family. The things that are actually tangible things. It’s a tangible thing. Something they can actually hold in their hands.

My grandfather left me this little picture that he sketched, of a little river and a cabin. I remember when I was a little kid going “Wow, my grandfather’s talented. Maybe I’m talented too.”

That’s all it needs is that little spark.

I watched my dad be creative and insane and when I was doing the music for (the e-book edition of) this with my daughter, my grandson was sitting there watching me be insane. I could see that look in his eye like “Ooooh, this might be a cool option.”

You worked with illustrator Rob Nason over Skype. What were those Skype sessions like?
Skype is amazing. You have to be careful about falling in love on Skype. It’s dangerous. Dangerous.

We were back and forth all the time because I wasn’t doing a film at the time. I was making all my mad little doodles and stuff like that all over the place, sending him pictures, and acting stuff out.  I would say “We need more joy. Roland’s like a joy-gasm.”

(Pictured above: “Everything starts with a funny face, remember that,” Carrey told the kids as he showed some screen grabs from his concept sessions on Skype.)

How does receiving Gelett Burgess honors (for Children’s Book of the Year) compare to other accolades you’ve received in your career?
It’s a new field. It’s always great to be welcome and recognized right out of the chute. It’s a thrill. It’s absolutely wonderful.

I have lots of new ideas and other things I want to do. I have an autobiography that’s coming out in the next year or so, and it’s really different.

Are you nervous that any of your youngest fans, maybe those that were too young to even see you in “The Grinch” (2000) or “Horton” (2008) might know you only as Jim Carrey, the author?
(Laughing) That would be hilarious.  No, no, I’m not worried about that.

Somehow, I tripped in to the right magical zone in my life where the work that I do seems to be reintroducing itself to new generations all the time. It’s a great feeling, it really is.

The book is an excuse for families to be together. I get people all the time that say “We watch ‘Dumb and Dumber’ – the youngest of us, the oldest of us, we all laugh.” That’s a cool feeling.

Has anyone given you any good advice on how to get  your hand through these marathon signing sessions?
It’s weird because it’s an exercise in being present with people. It can be super super draining if you look at it like work and you’re just going to power through a bunch of these things and get out of here.

But, if I look forward to each person that comes up and have a moment and just connect, it actually energizes you. It’s not bad. I keep my hand on my wallet though.  It’s a lot of folks, lot of folks. I’m going to be using some wipees later.

How have you adjusted to life in Georgia? (Where “Dumb and Dumber To” is currently shooting)
(Mocking and joking) I have a hat that’s made out of a duck.

To me it’s not places, right, it’s people. We’re having a great time, a wonderful time. Just putting the old costume back on and having a blast with Jeff (Daniels). It’s totally insane. Worse than the first one.