Call it the “Valentine’s Day Massacre.”

A storm of emotional outbursts erupted Tuesday on Twitter after Jim Cramer, the king of the emotive outburst and host of CNBC’s “Mad Money with Jim Cramer,” posted a photo of empty store shelves with a caption simply reading “suboptimal.”

Cramer was presumably offering economic commentary on the potential plight of consumers amid the combined effects of supply-chain shortages and the Omicron variant’s COVID-19 surge.

But what Cramer apparently failed to see were pink strips below the featured shelves, prompting many to take the CNBC host to the presumptive cleaners over what they saw as a short-sighted attempt — with the photo revealing nothing more than a store that had made room for Valentine’s Day inventory. 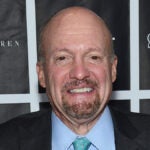 The apparent misstep had “Valentine’s Day” trending on Twitter. It also recalled a gaffe that cast Cramer in a similar light last year, after he called House Speaker Nancy Pelosi “Crazy Nancy” to her face during an interview on his show.

“There was an aisle in our local Kroger that looked like this, too,” noted one tweet reply. “….An hour before they filled it with Valentine’s Day merch.”

See more reaction below (but be warned; some of it is NSFW).