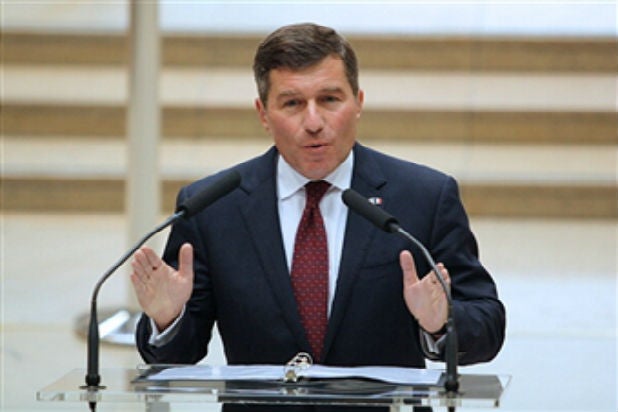 Former Jim Henson Company CEO Charles H. Rivkin, who has been tapped by President Obama as an assistant secretary of state, has named the safeguarding of the entertainment industry’s intellectual property rights as one of his key priorities.

“From my  vantage as a [former] CEO, it is clear to me that strong intellectual property rights and open markets are critical components to developing a thriving film industry,” said Rivkin at a forum in Beijing, China, that was sponsored by MPAA. In February, Rivkin was confirmed by the Senate as assistant secretary for the Bureau of Economic and Business Affairs.

Also read: ‘How to Train Your Dragon 2’ Soars to $26 Million Opening at China Box Office

“Making a $200 million bet on a new movie or film technology is difficult if a company cannot adequately protect its intellectual property,” he said, according to a transcript of the speech from the State Department.

Rivkin told the forum that protecting the movie industry’s patents, licenses, trademarks and copyrights is “vital to creating thrilling and enduring movies [that] allow rights holders to earn profits and recoup the cost to develop their creative ideas.

“Yes, movies matter to us as consumers. But they also matter to the people who create the ideas, the products and the technology that make them possible,” he said. “And not just the ones who invented it, but the ones who work on it.

“There’s a whole industry of men and women — all over the world, not just in the United States — who develop, produce, create, distribute or promote motion pictures and television programs. And whether they are artists or technicians, their livelihoods depend on the films that enrich our lives.”

“Back when I started in the entertainment industry, I would not have imagined that China would be on pace to become the largest film market in the world,” Rivkin revealed. “The news that “Transformers: Age of Extinction” broke $300 million in the China market alone is truly remarkable.”

“The technological advances that shape the movie experience [such as IMAX, 3D and thunderous surround-sound] and allow the audience to get lost in the story are one part of the complex production process and viewing experience,” he said, adding that they were developed through painstaking research, trial and error, and funded by millions of dollars of investment.

While the issue of enforcing intellectual property rights goes far beyond the entertainment industry, it is especially strong there, emphasized Rivkin. “I am deeply concerned about digital piracy, which is a real threat to U.S. and Chinese content creators alike,” he said. “Some films are adversely impacted because pirated versions are available prior to the films’ official opening, decreasing the number of potential moviegoers, as we have seen in the  recent case of ‘The Expendables 3.’