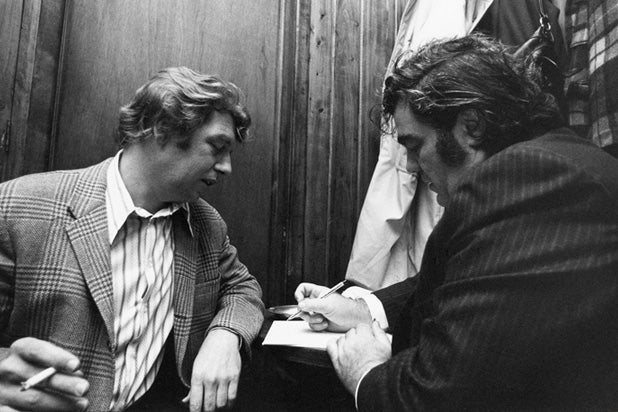 It’s been quite a week for the fourth estate, or the enemy of the people, depending on your viewpoint. Most notably, BuzzFeed has had a bipolar ride and NBC’s Savannah Guthrie took heat for being either too tough or too soft on the Kentucky high school student accused of harassing a Native American man. So consider it a momentary balm that three classic 20th century journalists — about whom few questioned their honesty and craft — are back in the news.

Speaking about Jimmy Breslin and Pete Hamill in the HBO documentary “Breslin and Hamill: Deadline Artists,” new Oscar nominee Spike Lee says, “These guys were superstars.” Breslin and Hamill were as colorful as any characters they covered in their long New York City newspaper careers. They — and the film — were even mentioned in the New York Times obit for Russell Baker, another award-winning New York-based columnist, who passed away this week at age 93.

HBO threw a classy bash for “Breslin and Hamill” last week at New York’s Columbus Circle, a who’s who (or, let’s face it, a who’s he) of every name in legendary East Coast journalism. Gay Talese, Carl Bernstein, Jeffrey Toobin, Robert Caro, Phil Donahue and Dan Rather were among the guests enjoying the film, swapping stories about their onscreen appearances. Breslin, who died in 2017, was represented by his widow and son. (His first wife and two daughters died tragically.) Hamill is still alive but was unable to attend.

While Hamill was the more dashing figure — he dated Shirley MacLaine, Linda Ronstadt and Jackie Onassis — Breslin’s Queens-born personality proved to be truly inimitable. He wrote a popular novel called “The Gang That Couldn’t Shoot Straight,” which became a 1971 movie starring Robert De Niro (who appears in the movie) and even hosted “Saturday Night Live.”

Neither Breslin nor Hamill were college graduates — Hamill didn’t complete high school — but they became famous for seeking the stories behind the stories. Breslin’s signature piece of reporting was his coverage of John F. Kennedy’s funeral. While virtually every reporter in Washington followed the details of the ceremony, the investigation into the assassination and the First Lady, Breslin went to Arlington National Cemetery to interview the gravedigger assigned to prepare the grave for the slain president. The man, who made $3.01 an hour, called that task “an honor.”

The documentary, directed by journalists Jonathan Alter, Steve McCarthy and John Block, comes at a crucial moment in the history of American media, which is why they were able to sell it to the usually forward-thinking HBO. “We made a six-minute sizzle reel and showed it to Richard Plepler [CEO of the network] and he bought it on the spot,” says Alter. “It helped that our film is loaded with celebrities.”

Not surprisingly, a younger and thinner Donald Trump is featured in one section, calling for the death penalty for the five young men of color arrested for the 1989 attack of a Central Park jogger. (They were later acquitted.) But the most spirited and touching parts of the film are the joint interviews with its two subjects, both looking frail and old but with memories sharp. Breslin’s account of the deaths in his family will generate the viewers’ tears, tears he himself had trouble ever showing.

There were demons aplenty: alcohol, for one. Hamill speaks of his neighborhood where “the favorite bar was the nearest bar.” Hamill wrote a memoir called “A Drinking Life” and gave up booze in the ’70s. Breslin got in his most serious career trouble when, at Newsday in 1990, he faced backlash for his treatment of an Asian American co-worker. Breslin, too, gave up drinking in his later years.

Like “The Front Page” and “All the President’s Men,“ the doc affectionately recalls the time of competing big-city papers, when newsrooms were filled with the clacking of typewriters and the yelling of voices (“Copy!”)

“You’re not important enough to have writer’s block,” a self-pitying Hamill was once told. He got back on track and went on to one of his greatest achievements — being named on Nixon’s enemies list. Breslin, who won a Pulitzer for his commentary, also took pride in the enemies he accrued over the years. He became such a powerful figure that even David Berkowitz, the city’s notorious Son of Sam serial killer, wrote a letter to the columnist while the hunt was on. “He was the only killer who understood how to use the semicolon,” Breslin later pointed out.

Breslin, Hamill, Baker: three names everyone on deadlines should be required to study. Who would have ever thought that documentaries about old journalists — and new ones, like those in Showtime’s “The Fourth Estate” — would be the vehicles to teach a new generation of digital reporters how it must be done.

“Breslin and Hamill: Deadline Artists” is scheduled to premiere on HBO on Monday.