A new poll zeroed in over the weekend on the 2024 presidential election, and specifically the prospective reelection bids of President Joe Biden and former President Donald Trump.

Among the takeaways was the fact that the two are practically in a dead heat for the electoral win – a conclusion that Jimmy Fallon teased on Monday was a little early to be thinking about in the first place.

“A new poll showed that in a potential 2024 matchup, Biden and Trump are essentially tied,” the host of “The Tonight Show” said before adding a caveat. “Keep in mind that the poll has a three-point margin of error and a 10-point margin of: ‘These guys are, like, 80, let’s not get ahead of ourselves.'”

Trump is currently 76 years old, while Biden turns 80 in November. Neither have formally announced their intentions to run again in 2024. 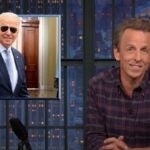 The poll comes via ABC and The Washington Post, was conducted by telephone between Sept. 18 and Sept. 25, and surveyed 1,006 adults at random, including 908 registered voters.

The poll found that in dual reelection campaigns pitting Trump and Biden against each other once again, Biden would lead with a 2% margin: 48% to Trump’s 46%. It also noted, however, that if only the 908 registered voters were considered, those results would flip to Trump with the 48% lead over Biden’s 46%.

Overall, the same poll indicated that Republicans and Democrats alike aren’t as enthusiastic as they once were for these candidates. Biden has always suffered from a comparatively low approval rating, though he has seen an uptick of support in the last few months. This ABC/Washington Post poll found that only 35% of registered Democrats and independents who lean toward the party support Biden in a prospective reelection, while 56% prefer another candidate on the ballot.

Trump, meanwhile, has 47% support from registered Republicans and right-leaning independents, while 46% percent want another candidate.

For Fallon’s full monologue from Monday, which also discussed Rihanna’s freshly announced Super Bowl Halftime Show performance, tune in to the video above. 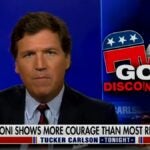