Former president Donald Trump was met with a civil fraud lawsuit from New York Attorney General Letitia James on Wednesday, and “The Tonight Show” host Jimmy Fallon can tell he’s getting worried. “He just asked Ron DeSantis to fly him somewhere random in the middle of the night,” he joked.

Breaking down the contents of the $250 million suit, which accuses the twice-impeached former president of widespread business fraud and inflating the value of his properties, Fallon detailed how Trump claimed his Mar-a-Lago estate is worth $739 million, but it was only appraised at $75 million. 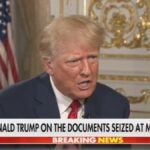 Putting on his Trump impression, Fallon figured out where he got such a gargantuan number: “Technically, with all the classified documents, it is worth $739 million.”

And it’s not the first time that Trump has been accused of exaggerating the size of his wealth, properties and more – and Fallon gleefully pointed that out in the Wednesday night monologue.

“Yes, Trump exaggerated the size of his wealth, his apartment, and his properties – it’s the first time he’s ever lied about how big something is,” Fallon set up to audience laughter. “Other than his inauguration crowd, his vote total and his night with Stormy Daniels.”

Then, Fallon turned his attention to Attorney General Letitia James, commending her on her sly mic drop while wrapping Wednesday’s press conference announcing the lawsuit.

“The attorney general laid out all the details of Trump’s alleged fraud, and then she ended her press conference by saying this,” the host said, playing a clip. “‘Claiming you have money that you do not have does not amount to “The Art of the Deal,” it’s the art of the steal.'”

“That’s a burn!” Fallon quipped. “That’s an accidentally locking yourself in a tanning bed burn!”

Watch the full monologue from Wednesday’s “The Tonight Show” in the video above. 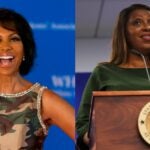