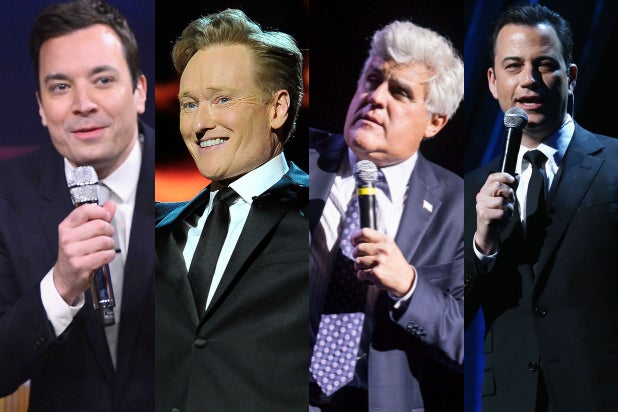 Jimmy Fallon‘s “Tonight Show” has been killing it in the ratings — with a very strong assist from its Winter Olympics lead-in.

Below Conan is Jay Leno’s return, which got a 1.5/7 over the course of its four shows during his second debut. However, TV’s ever-changing landscape was different enough even just a few years ago to make the numbers difficult to compare to today’s metrics: ABC, CBS, and NBC were averaging a 1.1 in 18-49 in the 11:35 hour, whereas today they do a 0.7.

In terms of average audience, the first week order remains the same: Fallon has pulled in 8.4 million per night thus far, Conan opened with a mean 6.4 million, Leno’s return averaged 5.8 million and Kimmel rounded to 3.1 million.

The numbers are not a flawless comparison — after all, Fallon has benefited from NBC’s Sochi Games coverage, which has led into his first four episodes. To-date, “The Tonight Show Starring Jimmy Fallon” has kicked-off at midnight. That will change Friday when the curtain rises for the show’s actual timeslot 11:35 p.m., featuring guest Justin Timberlake.

In defense of Kimmel’s seemingly unimpressive numbers: the ABC personality’s comparative debut week was a timeslot shift from midnight to the competitive 11:35 p.m. Naturally, the curiosity surrounding brand new hosts and the return of  popular veteran Leno would outweigh that of a move to an earlier shift. Kimmel’s first week figures also only incorporate three nights, not four, as his timeslot curtain rose on a Tuesday.

For the record: An earlier version of this story referred to Kimmel’s original timeslot as 12:35 a.m. ‘Jimmy Kimmel Live’ previously aired at midnight. TheWrap regrets the error.