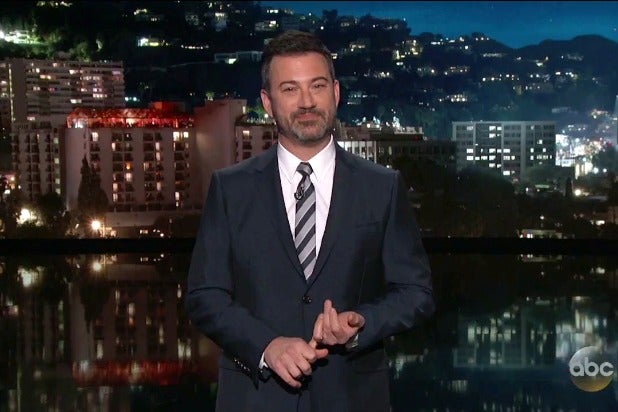 Jimmy Kimmel’s week of hyping up the imminent release of “Avengers: Infinity War” continued on Wednesday night, but of course that didn’t stop him from slipping in some mean jokes at Donald Trump’s expense. Especially with the incredibly strange budding bromance between Trump and Kanye West dominating the conversation all day.

“President Trump and Kanye West are becoming quite a duo,” Kimmel said. “The president and Yeezy had a back and forth on Twitter today. Kanye got it going. He wrote: ‘You don’t have to agree with trump but the mob can’t make me not love him. We are both dragon energy. He is my brother. I love everyone. I don’t agree with everything anyone does. That’s what makes us individuals. And we have the right to independent thought.’ “

Kimmel suggested that Trump probably had a pretty specific reason for caring about Kanye’s profession of love — beyond, of course, just how much Trump enjoys hearing people say nice things about him.

“And the president was so moved by Kanye’s words, he baby-thumbed this very gracious response: ‘Thank you Kanye, very cool.’ Very cool, indeed. The coolest, really,” Kimmel said, before getting to the point. “So now Donald Trump has two black friends. I hope Ben Carson doesn’t get jealous.”

The continuing Twitter exchange, Kimmel joked, then led to a very important development in the Trump administration.

“And the lovefest did not end there. Next, Kanye tweeted a photo of his MAGA hat either signed by Trump or an EKG, I’m not sure,” Kimmel said, displaying the photo below. 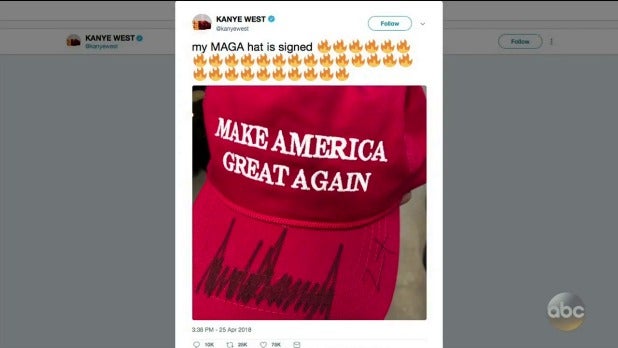 “The president then retweeted that with his famous acronym: ‘MAGA!’ And just like that, Kanye West became our new Secretary of State. America really is great again.”

You can watch all of Wednesday night episode of “Jimmy Kimmel Live” on ABC.com right here.