Jimmy Kimmel is one of the many Americans appalled that Trump ally Mike Flynn pretty much straight up said he thinks there should be a military coup in the United States in order to undo the 2020 election. And during his monologue Tuesday, Kimmel also took issue with the way the disgraced former general lied about those comments when they were made public.

Flynn, best known for lying to the FBI about his illegal work on behalf of foreign governments, and for several seditious comments during the 2020 election, appeared over the weekend at QAnon conference in Dallas. Adherents of the QAnon conspiracy theory are widely supportive of the military coup in Myanmar and have embraced the treasonous idea that the US military should do the same thing here on behalf of Donald Trump. And when an attendee asked Flynn why a Myanmar-style military coup can’t happen in the US, Flynn said this:

“No reason, I mean, it should happen here. No reason. That’s right.” 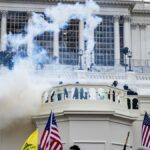 Kimmel brought all of this up during his monologue. “Trump’s old pardon pal Michael Flynn – a man who admitted to lying to the FBI – went to prison for it – appeared at what was essentially Q Anon-con this weekend, where he quite plainly – supported an idea from a man in the crowd – who asked why we don’t just overthrow the government?”

Kimmel played the clip of Flynn’s comments, and then reminded the audience of how scary they are. “Myanmar is a country in Southeast Asia – in February – the military seized control of the company – of the country – they refused to accept the results of the election there – so they organized a coup. Thousands of protestors have been imprisoned. Hundreds have been killed. And General Lie-senhower up there – thinks we should do that here too,” Kimmel said. 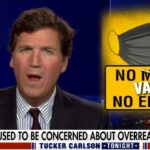 “Although – after it was suggested that he be court-martialed for that remark- Flynn tried to walk it back,” Kimmel continued. “He wrote: ‘Let me be very clear – there is no reason whatsoever for any coup in America, and I do not and have not at any time called for any action of that sort.'”

“Except for – this weekend – when you did it on video. And the times you did it leading up to January 6th,” Kimmel added.

Watch the whole monologue above. The Flynn stuff kicks in about 4 minutes in.